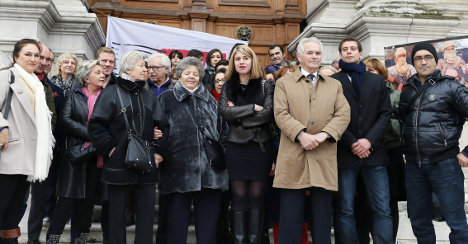 Monday's remarks came amid fears for the lives of French hostages in the area following reports over the weekend that Chadian troops had killed Al-Qaeda-linked leaders Abdelhamid Abou Zeid and Mokhtar Belmokhtar in northern Mali.

Speaking about the hostages, Jean-Yves Le Drian told France 2 television: "As we speak, there is every reason to believe they are alive."

Abou Zeid was believed to have been holding four French citizens kidnapped in Niger in 2010, but the French army's chief of staff, Admiral Edouard Guillaud, on Monday said that could not be confirmed.

Responding to Chadian claims that Belmokhtar and Al-Qaeda in the Islamic Maghreb (AQIM) chief Abou Zeid had recently been killed, Le Drian said he had no "proof of death" for the two men.

"I won't tell you that one or the other is dead because I don't know."

He added that "several hundred" militants had been killed in battles with French-backed troops in northern Mali and confirmed that prisoners had been taken, without going into details.

Saying that he understood "the anguish of the families and their pain", the minister insisted that France was operating "with respect for the lives of the hostages".

Le Drian also said the French government was "actively" working to free seven members of a French family, including four children, who were abducted by Islamists in Cameroon last month.