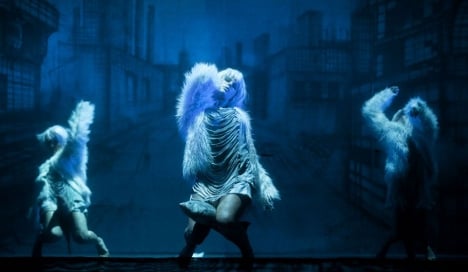 They were rail thin, had spiky dyed hair, and wore leather. They thrashed around on stage moaning into the mic. They were the heroes, inviting us into their anarchist worlds of music and freedom. This week at at Stattbad Wedding, legendary footage from the 1980s West Berlin music scene flashes across the walls and pumps from the DJ stand. DJ Maria Zastrow aka DJ Disctator mixes original tapes from the infamous West Berlin bar Risiko Thursday, while DJ Mark Reeder mans the decks Friday. “Get trapped in music.”

Shanghai cinema from the 1930s and the early filmography of the acclaimed Chinese director Xie Jin are two focuses of a new film series at Kino Arsenal that starts Friday. Kicking off the program is Ma-Xu Weibang’s Song at Midnight, an adaptation of Phantom of the Opera that is considered the first Chinese horror film. Go and get your Chinese film fix.

Into the Wild, the Spanish pop-duo Amaral’s sixth studio release ruled the music charts when it came out a couple years ago. If you were among the masses singing along to hits like the title track “Hacio Lo Salvaje” in Spanish, you’ll want to make your way over to Bahnhof Ehrenfeld Thursday night when singer Eva Amaral, guitarist Juan Aguirre, and their band bring their Iberian spunk to the stage. Stops in Freiburg and Munich follow the Cologne show.

Roll Over – Reflections on Documentary – After Richard Leacock

The British/American filmmaker Richard Leacock strove to get as close to reality as possible during his career creating documentary films. A new exhibition in Cologne examines documentary as a film form, posing questions like “how can I get closer to the subject I’m interested in?” and “how to reveal circumstances that have gone unnoticed before?” Think about it this week when you’re watching rare Leacock films alongside new works by contemporary artists at the Temporary Gallery.

High-heeled hookers hopped up on heroine are the swans in this modern take on the ballet classic. Directed by the energetic dancer/choreographer Fredrik Rydman, the vivacious cast struts, swirls, flips, and break dances to a mix of Tchaikovsky’s original score and the electro breakbeats of newly commissioned works. It’s more Justin Timberlake than Vaslav Nijinsky, giving the timeless ballet masterpiece a fresh and fantastically vibrant new look.

The iconic Spanish director Luis Bunel is the subject of the Cervantes Institute’s current “Monday Cinema” program. Released in 1962, during one of the most controversial times in the acclaimed director’s tempestuous career, The Exterminating Angel follows the plight of a group of fancy party guests trapped in a mansion’s music room. Get wrapped up in the eerie, but absurdly comical story this week when the film classic screens with English subtitles.

Alexander Nut and Sam Shepherd aka Floating Points are the London based team behind the record label Eglo. The guys have sure got their fingers on what’s hip in the music world. Check out Swedish singer Fatima and her band, as well as a handful of DJ sets by hip hop, house, and techno spinners like Murat Tepeli, Aroma Pitch, and Kieran Rodrigez at Stadtgarten’s Eglo Label Night.

The Elbe Philharmonic’s “Lux Aeterna” festival celebrates spiritual music. But it’s not the traditional churchy stuff you’re thinking, it’s the things that really penetrate like Richard Strauss’s “Also Sprach Zarathustra.” The tune plays a critical role in setting the atmosphere in Stanley Kubrick’s sci-fi masterpiece 2001: A Space Odyssey, which screens Sunday at Metropolis Cinema in a three-part film series that compliments the Philharmonic’s program of concerts. The two other films are Tree of Life and Lumia, and they’ll all be shown in in their original English language versions.

It’s hard to believe such a relevant story can be turning two hundred, but such is the case with the beloved Jane Austen novel Pride and Prejudice. In preparation for a possible fall staging, the Hamburg Players are giving a reading of the play version of the timeless tale. “I declare after all there is no enjoyment like reading!” Miss Caroline Bingley says in an attempt to impress Mr. Darcy in chapter 11. How right you are Miss B! And few books-turned-play read as well as Austen’s. Get your fill of witty English banter Friday.

Black women were important figures in the fight against slavery in America in the 19th century. Their courageous efforts persisted through the civil rights movements of the 1950s and 1960s, continuing even today in the struggle for racial equality. On Wednesday, historian Britta Waldschmidt-Nelson leads a discussion on female heroes like Sojourner Truth and Rosa Parks, and talks about the significance of having a black First Lady for the first time in US history.