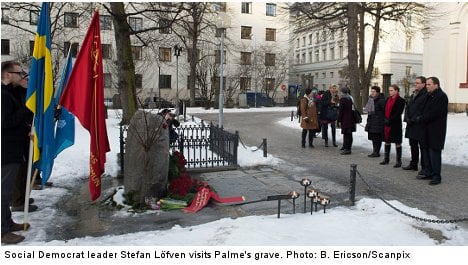 The Palme Group (Palmegruppen) within the police’s criminal investigation unit will be on stand by to answer the phone between 3pm and 10pm on Thursday.

“There can be people who have thoughts on the matter who never contacted us because they assumed others would have said the same thing,” investigative officer Dag Andersson wrote on the police website.

“It is better to get in touch one time too many than one time too few. All tip offs and all information is interesting.”

Palme was gunned down on Sveavägen as he and his wife walked home from a late night screening of the film The Mozart Brothers. The killing has spawned myriad conspiracy theories but no one has ever been jailed for the murder.

The Social Democrat prime minister was an outspoken critic of the war in Vietnam and apartheid in South Africa, among other international issues, as well as the leader of the workers movement in Sweden.

Last year, a documentary about him showed in Swedish cinemas, with a longer version split into a television series.

Also in 2012, the release of the feature film Call Girl divided opinion but brought Palme back into the limelight. Despite its director’s claims that the film was fiction inspired by real events and the mood of a specific era in Swedish politics, many, including the Palme family, interpreted it as an accusation that Palme had bought sex.

The politician’s death anniversary is usually honoured by his party, the Social Democrats, with their current leader Stefan Löfven placing a wreath on his grave in central Stockholm on Thursday morning.