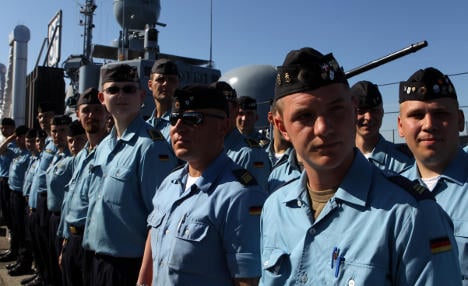 Hermelin crew members depart for Lebanon in May 2012. Photo: DPA

The victim holds the rank of bosun – the equivalent of a staff sergeant in the army – and is German-born but of Thai descent, the Süddeutsche Zeitung reported on Tuesday.

At least four first mates – the equivalent of sergeants in the army – dragged their superior officer out of his bunk late at night on February 15th, while the German Navy’s warship the Hermelin was docked in Beirut harbour.

They taped the man, who was only wearing underwear, to a table before writing “this is where the mongs live” on his legs, the paper said.

“All investigations we’ve conducted so far have shown that the incident [did not have a] xenophobic background,” control command told the paper, adding it did not appear alcohol had played a role in the attack either.

At least four first mates are thought to have been involved in the incident and were sent back to Germany to face disciplinary action, the paper said. The state prosecutor in Rostock is expected to investigate further.

The victim has remained on board, where the Marines will continue with their UN mission off the Lebanese coast.

The paper suggested that because the boat was so small – the Hermelin is just over 60 metres long – it was likely that other crew members were culpable in the incident in that they looked on without intervening to prevent it.

Two sailors took photos of the incident with their phones and were later ordered to delete them. At least 13 people were interrogated in relation to the incident, wrote the paper.