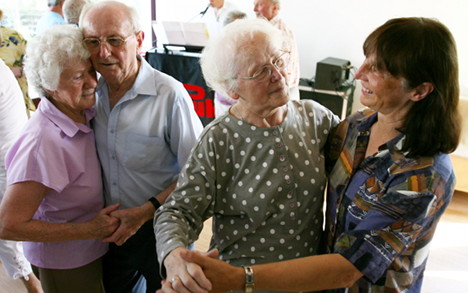 The Hotel Sportforum in Kaarst-Büttgen, near Düsseldorf in North Rhine-Westphalia, used to host the afternoon tea dance to which up to 35 pensioners would come to dance to live swing music, played on a piano.

With free entry as long as each dancer spent at least €4.50 on drinks or buns, the afternoon had, according to regional newspaper the Westdeutsche Allgemeine Zeitung become popular among seniors in the area.

But last July the party was cancelled after GEMA, the German association responsible for collecting royalties, said that the hotel was not paying enough. A representative spotted a poster advertising the free event and smelt a rat.

It demanded Hotel Sportforum pay €150 a month – three times more than what it was currently paying. For a small hotel, this was too much.

GEMA said an institution had to pay music fees no matter whether they were using it for a good cause – just like electricity bills.

Elderly people “should dance, preferably every day but the owners of the music also have a right to get paid,” Gabi Schilcher from the company told the newspaper.

Hotel owner Susan Losseff expressed her disappointment in GEMA and said that “the tea dance was a meeting point for elderly people and it was really only about meeting up and having a chat.”

Many of the guests lived alone and Losseff said she and the pensioners were determined to figure out a way to get the afternoon swinging again.