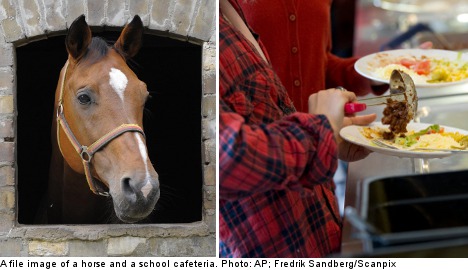 French supplier Comigel has provided Coop, Ica, and Axfood with horsemeat lasagne, despite claiming it was beef on the packaging.

Some samples had 100 percent horesemeat, according to Christine Kullegren, spokeswoman at Coop.

Ica heads refused to go into details as to whether trust has been lost with the French company.

“We can’t answer that right now, but we have had some good feedback. They have ceased connections with their subcontractor Spanghero and are sanitizing the whole factory to get rid of any traces of horsemeat,” Johanna Stiernstedt, head of quality control at Ica, told the TT news agency.

The scandal has affected other countries besides Sweden, with France, the UK, Romania and Poland also being hit by the horsemeat horror. Suspicions have even surfaced in Germany where the meat may also have been on sale.

Back in Sweden, Agricultural Minister Eskil Erlandsson said he didn’t believe any changes to the food packaging requirements were necessary.

“I’ve not had any indications from our expert authorities on a need for changes,” he said.

“We have a very strict legal framework – whatever it says on the packet should be the same as what is in the packet.”

Ica has made a complete recall of their lasagne products. Company heads said they would meet with Comigel representatives next week.

A man wearing a protective suit in the district of Gütersloh after a coronavirus outbreak at a meat plant. Now neighbouring district Warendorf is going into lockdown. Photo: DPA

“In order to protect the population, we are now launching a further safety and security package to effectively combat the spread of the virus,” North Rhine-Westphalia health minister Karl-Josef Laumann said Tuesday, ordering a lockdown for the district of Warendorf.

Authorities had earlier announced similar measures in the neighbouring district of Gütersloh after more than 1,500 workers tested positive for Covid-19 at the slaughterhouse.

Almost 280,000 people live in Warendorf. Businesses and cultural facilities will close, while all schools and daycare centres (Kitas) will also shut their doors.

In Gütersloh the new lockdown affected 360,000 people living there and will be in place until at least June 30th.

It came after more than 1,500 workers out of a total of nearly 7,000 have tested positive for Covid-19 at the slaughterhouse in Rheda-Wiedenbrück run by Tönnies.

All workers are currently in quarantine. However, authorities are now turning to tougher rules to try and control the spread of coronavirus.

However, restaurants can remain open with rules in place.

Schools and Kitas were already closed last week in a bid to control the virus.