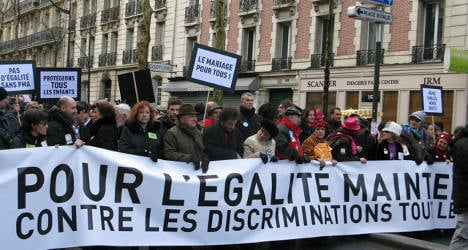 Demonstrators march through the streets of Paris on Sunday in support of the government's bill to legalize gay marriage. Photo: The Local

Waving rainbow flags and carrying banners reading "For equality now, against discrimination always", the demonstrators marched to promote their cause exactly two weeks after hundreds of thousands descended on the French capital to rally against government plans to legalize gay marriage and open adoption to same-sex couples.

Leftist firebrand Jean-Luc Mélenchon, who greeted marchers at Port-Royal told The Local: “This demonstration is all about demanding equality. Those who are against it have protested, and today it's our turn.”

Mélenchon, a candidate in last year's presidential elections said: “We have to advance the idea of marriage for all. This has been important to the Front de Gauche (Left Front) party for a long time.”

The proposed legislation, which has come in for strong criticism from the mainstream centre-right opposition, the Catholic church and leaders of France's five-million-strong Muslim community, is due to be debated in parliament on Tuesday.

Nonetheless, Yvonne Brochard-Roland, an elderly mother of four, who has been married for 50 years and grew up in the 14th arrondissement of Paris, told The Local: “I came here because our children have friends who are gay, whom we know well and respect.”

“Of course I support equality for those people. That includes marriage and it includes adoption, too,” she said.

IN PICTURES: Meet the faces of Sunday's march for gay marriage

The rally was backed by Prime Minister Jean-Marc Ayrault, who on Saturday said there was "no doubt" about the outcome of the equality bill. "A law will be passed and with a large majority too," he said.

This was a view shared at Sunday's protest by Franck, 27, from the Parisian suburb of Massy, who declined to give his full name.

Draped in a rainbow flag at the foot of the iconic Colonne de Juillet (July Colomn), he told The Local: “The law itself will definitely succeed, but I came here anyway to continue to show my support for equality, and to show that we're united against discrimination.”

“From time to time I get homophobic insults on the street.”

The proposed legislation stems from a promise by President Francois Hollande in his election manifesto last year.

The Socialist leader has dismissed opponents' calls for a referendum on the controversial topic and is already pencilled in to attend one of France's first gay marriages once the legislation is enacted later this year.

Despite recent protests against the bill, opinion polls have consistently shown that most French voters support the right of homosexual couples to wed.

A recent Ifop survey found that 63 percent of respondents were in favour of same-sex marriage. But they were highly divided on whether same-sex couples should have the right to adopt, with 49 percent saying they were in favour, compared to 51 percent against.

Two weeks ago, an anti-gay marriage march brought 340,000 protesters to the Eiffel Tower. Referring to that demonstration, Lucie – who also declined to give her full name – said: “Most French people support gay marriage, but there is this small but vocal minority who are against it.”

“Yes, from time to time I get some homophobic insults on the street, but I also know that in general, French people support equal rights for gay people,” she concluded, to nods of agreement from nearby demonstrators.