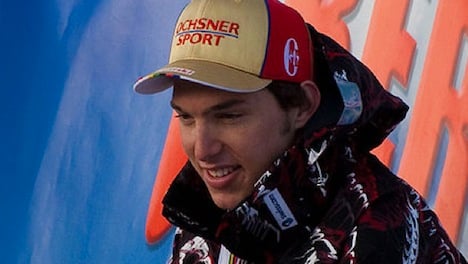 Carlo Janka made it the podium before a partisan Swiss crowd at Wengen. Photo: Wikimedia Commona/Moltebeeri

The talented youngster was only 22nd after the morning downhill leg but blitzed down the Wengen piste to finish comfortably ahead of Croatia's Ivica Kostelic .

Kostelic was 1.15 seconds back, while Switzerland's Carlo Janka, who won here in 2009, was 1.49 seconds behind in third place, his first podium finish of the season.

Pinturault, who won the slalom at Val d'Isère last December, can emulate compatriot Jean-Baptiste Grange if he wins the slalom on Sunday by achieving a rare double that the 2011 slalom world champion achieved at Wengen in 2009.

"I wanted to limit the damage in the downhill and turn in a great run in the slalom," Pinturault said.

"I always try to put in plenty of intensity," he said.

"I love it here," Pinterault added, after his third career win.

"The piste is magnificent and the Swiss crowds are always very pleasant."

Norwegian Aksel Lund Svindal, who came into the weekend second behind Austrian Marcel Hirscher in the overall standings, finished tied for 14th.