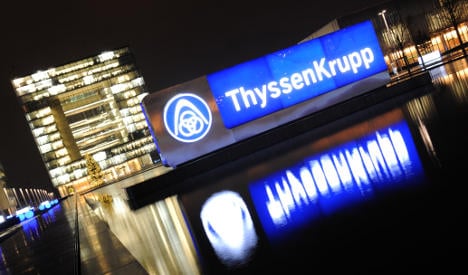 The supervisory board’s 20 members would “forego half their pay for 2012,” board chief Gerhard Cromme told ThyssenKrupp shareholders at their annual general meeting in Bochum, northwest Germany.

“This gesture is intended as a sign of our dismay and our solidarity with you, our shareholders,” he said.

The move is related to huge losses the company incurred at new steel mills in Brazil and the United States.

ThyssenKrupp has been forced to write down the value of those plants, running up an overall year-end loss of €4.7 billion ($6.3 billion) for the business year ended September 30.

Given the magnitude of that loss, the group announced it would not pay a dividend for the first time since the merger of Thyssen and Krupp nearly 14 years ago.

The steel mills have since been put up for sale, but negotiations are still ongoing.

The annual meeting was an uncharacteristically stormy one, with not only shareholders calling for Cromme to step down in the wake of the debacle concerning the steel mills, but also anger at a recent string of scandals at the company.

The scandals include a price-fixing cartel, luxury trips laid on for journalists and alleged bribery in contracts in eastern Europe and China.

Such networks were not only “outdated, inflexible, slow, [but] as we are currently seeing, also destructive,” Hiesinger said.

“The cultural change now under way is desired and there is no alternative.”

Hiesinger also said ThyssenKrupp was sticking to its earnings targets for both the current quarter and the full year.

“A full-scale recovery of the global economy is… not in sight for our fiscal year 2013,” he said.

The global business environment remains clouded, because the sovereign debt crisis in the euro zone is still unresolved, while growth momentum in emerging markets is slowing.

He also said that ThyssenKrupp expected “declining momentum” in the automotive industry, a key industry for the group.

Additionally, the steel industry faces a challenging environment due to falling volumes and increased price pressure.

ThyssenKrupp continued to project underlying profit of around €200 million for the current quarter and €1 billion for the whole year, down from around €1.4 billion last year.

Sales were expected to remain stable at around €40 billion.

Hiesinger said the planned sale of the group’s steel business in the US was on track and was expected to be concluded before the end of September.

By contrast, ThyssenKrupp had no plans to sell its steel business in Europe, he insisted.

ThyssenKrupp shares were among the biggest losers on the Frankfurt stock exchange on Friday, shedding 1.14 percent in an only slightly softer market.