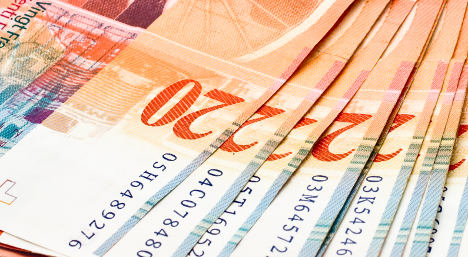 The franc on Wednesday fell to its lowest level against the euro since December 2011 as investors ditched it in favour of other currencies.

The euro peaked as high as 1.24 francs in foreign exchange trading early Wednesday after trading for months in a narrow band close to the 1.20 floor set by the Swiss National Bank in the autumn of 2011.

Traders say the move is due to improved sentiment about the eurozone following comments made last week by the European Central Bank after it held off cutting interest rates, already at a record low 0.75 percent.

Since then, the euro has gradually increased in value against the Swiss franc and other currencies, although the move is tentative.

Uncertainty about the real state of the European economy dragged the euro lower against the US dollar, Daily FX reported.

The Swiss franc strengthened slightly against the euro in late Wednesday morning trading when the euro was valued at 1.236 francs.

The currency’s downward move has led some analysts to believe the Swiss National Bank will lower the 1.20 floor it set for the franc in September 2011.

Since then the central bank has intervened in FX markets to ensure the franc, which it says is already overvalued, does not further appreciate.

A strong franc hurts the Swiss economy by making its exports more expensive.

Citigroup’s foreign exchange team told the Financial Times that the “combined impact of (an) improving outlook for the eurozone periphery and the newly introduced penalty rates on franc deposits” could make it easier for the SNB to take further action to weaken the franc.

Rudolf Minsch, chief economist for the business lobby group economiesuisse, said the change away from a “fixed peg” for the franc is positive news.

“Financial markets are starting to believe that the franc is over-valued,” Minsch told World Radio Switzerland.

The Swiss currency jumped in strength in 2011 when jittery investors sought it as a safe haven against concerns of economic problems in Greece, Spain and other European economies.

At one point it flirted with parity against the euro before the SNB intervened.