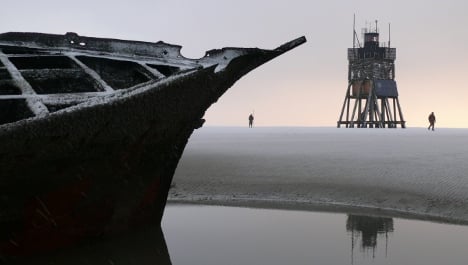 The wrecks have popped up on the Süderoogsand sandbank in the middle of the Wadden Sea, or Wattenmeer in German, a huge stretch of mudflats and sandbanks off the German North Sea coast.

One is the Ulpiano, which became stranded on its maiden voyage from Cadiz in Spain to Southampton in the UK, on Christmas Eve 1870. This is an old favourite for officials at the Schleswig-Holstein office for coastal protection (LKN), which is responsible for the area concerned.

Its figurehead has been a feature of the Wyker Friesen museum for the last 100 years, while extensive research has been conducted into the accident – from which the captain and his 11-man crew escaped, finding shelter with locals.

The ship itself was stripped of everything of value, include its wooden sides, leaving just the metal skeleton, according to Karsten Hansen, chairman of the Föhr museum society, who has been researching the wreck for the last two years.

He visited the remains as they first started emerging earlier this winter, the Schleswig-Holstein news portal shz.de reported in October. Since then storms have uncovered even more of the wreck.

The wreck “was poking out before, but nothing more,” said LKN spokesman Hendrik Brunckhorst. Now it is far more exposed, he said. “The Ulpiano is lying pretty open. You could look right into it.”

There is also a wooden wreck which is thought to date back to around 1700 about which there is no information. Specialists were due to examine it on Wednesday. There is as yet little information about the third, but Brunckhorst told The Local there was not much more than pieces of iron poking out of the sand.

The ships are near the beacon which sits on the sandbank. “When the ships ran into trouble on the sea, they tried to save themselves by heading for the beacon,” said Bruckhorst. It is the only thing on the sandbank, and can be seen from the water, serving as navigation aide, lighthouse and rescue point.

The sandbank has shifted around 40 metres east each year since 2005, the LKN said.

Coastal archaeology specialist Joachim Kühn, who used to work for the state investigating the region, said the current situation was very rare. He suggested wood probes be taken to see how old the newly found ship actually was.

They should work quickly though he warned – the next big storms could easily cover the wrecks up with sand again.