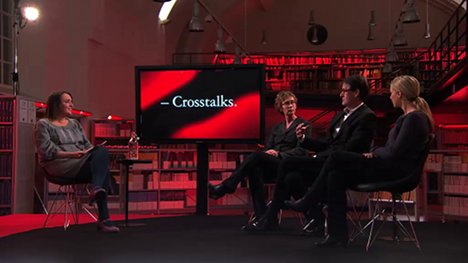 The programme, Crosstalks, has a chatshow type format, featuring studio guests and live link-ups with people all over the world via Skype.

Content is developed by an editorial team in Stockholm with the aim of stimulating academic discussions and attracting interest in both local and global issues. The response so far seem to suggest they are on the right track.

"So far the reaction has been very positive," says KTH project leader Annika Engström. "People have participated in discussions via social media with many followers, 'likes' and referrals. Many have followed the live broadcasts and taken part in discussions on the website.

"On the first programme we had people from at least 26 countries all over the world and we have new viewers and followers every day. The debates are meaningful and engaging," she adds.

The choice of platform and use of technology is completely in line with the ambitions of the production.

"This is the right media for the present and the future," says Engström. "Above all it is directed at the target group who want to see what interests them – it’s about quality before quantity. Why watch everything, when you can watch something that has been specifically created with your interests in mind, that arouses your curiosity and develops your talent?"

The first show, which premiered in late November, featured a guest line-up of researchers and professors including Johan Rockström, Åsa Moberg, Per Krusell and Pontus Braunerhjelm.

Filmmaker and photographer Mattias Klum joined via Skype, along with Josh Lerner, a professor at Harvard Business School and one of the world's foremost experts on venture capital financing.

"The guests are passionate about the subjects and share their expertise and research. Participants via Skype are just as engaged and want to join in on the discussions from their own perspective, other people’s research, the economy and more," says Engström.

"Talent attracts talent, as we know, and to inspire is important," says producer Tomas Axelsson. "We live in a time where technology, distribution and production are all there. Leading universities are a source of knowledge and exchange of ideas, but they are unfortunately lost in the media noise."

That guests can provide their perspective from anywhere in the world is testament to the global reach of the show. This is core to the project, because like the web itself, the kind of subjects they can, and do cover, range from local to global, with input from anywhere and at any time.

Web TV as a platform is hardly new, nor is the idea of reaching people all over the world. But any successful venture in this media space has to rely on a creative and educative content offering that is well targeted to the right audience. It is these issues that set the Crosstalks project apart, in an already crowded worldwide web.

"It is an innovative programme and website, where knowledge, curiosity innovation and entrepreneurship are key for talented people around the world, whatever stage their life or career may be at. Stockholm University, KTH, the city of Stockholm and Sweden form a fantastic meeting place for this kind of forum," adds Engström.

That it in turn, helps promote the idea of using technology as an academic platform. Another advantage is that it offers adaptability and plenty of different options for future programmes.

"Future topics include robotics, global health, particle and astrophysics. Viewers can already take part in discussions and help steer what will happen in future episodes of the show – they are just as important in this as the guests are," says Engström.

Above all, Engström stresses that it is an open forum, and the success of the show will largely come down to the audience. She urges people to participate by chatting with guests, joining online discussions, proposing ideas for future topics and forwarding their own ideas and research.

"We invite and encourage them to help create the programme and website," she says. "The audience plays a huge part."

Find out more about studying in Sweden at www.studyinsweden.se.

The proposal, one of three measures announced to “take back democratic control over the school system”, was launched on the first day of the Almedalen political festival on the island of Gotland.

On Sunday evening, Andersson is set to give the first big speech of the festival, with Ulf Kristersson, leader of the centre-right Moderate party, and Left Party leader Nooshi Dadgostar scheduled to make their speeches on Monday, and Sweden’s other party leaders taking slots on Tuesday, Wednesday and Thursday.

“Schools in Sweden should focus on knowledge, not on the pursuit of profit,” Andersson said, as she made the pledge, stressing that her party aimed not only to ban withdrawing profits, but also “to make sure that all the possible loopholes are closed”.

Free schools, she complained, siphon off billions of kronor in tax money every year at the same time as free schools increase divisions in society.

Banning profits from schools is an obvious campaigning issue for the Social Democrats. The latest poll by Gothenburg University’s SOM Institute found that fully 67 percent of voters support such a ban.

The only issue is that the Centre Party, whose support the Social Democrats will need to form a government, is likely to block a future Social Democrat government from implementing it, something Andersson was willing to acknowledge.

“What I know is that there’s a very strong support for this among the Swedish people, but not in the Swedish parliament,” she said.

The Social Democrats have campaigned on the issue in past elections, pledging to stoppa vinstjakten, or “stop the pursuit of profit in schools”, or, in the run-up to the 2018 election, only to see the policy blocked in the January Agreement the party did to win the support of the Centre Party and the Liberal party.

On Sunday, Andersson would not give any details on whether companies listed on Swedish or international stockmarkets would be prevented from operating schools, saying she was leaving such details to an inquiry into reforming Sweden’s free school system the government launched on June 30th.

In the press conference, Andersson criticised the inflated grades given out by free schools, which are dismissed by critics as glädjebetyg, literally “happy grades”.

“We end up having pupils who graduate with good marks who then realise that their school has let them down,” she said.

At the press conference, Andersson also reiterated the Social Democrats call to ban the establishment of new religious free schools, and announced plans for a national schools choice system, stripping free schools of the ability to run their own queue systems.