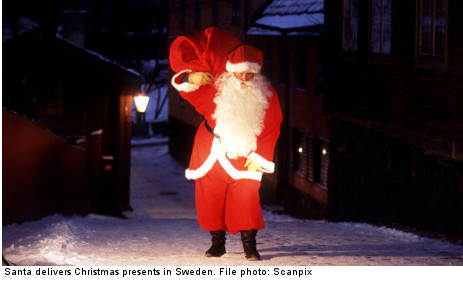 This is the third year in a row that Susanne and her helpers deliver gifts to families around the city. She gets more requests than she can handle – from Uppsala and beyond.

The Local caught up with Susanne in-between home visits on Christmas Eve, which is when Swedish families traditionally open their presents.

“We have between 30 and 40 visits booked in today,” explains Susanne who wants to keep her last name secret.

“I have an unusual name and I don’t want any of the kids to find out it was me and not the real Santa who delivered their gifts today.”

Susanne got the idea to set up Tomteservice when she dressed up as Santa and delivered presents to friends’ kids.

“That was three years ago. Those kids still don’t know that it’s me who comes every Christmas.”

She says there are two reasons why her Santa rental service has become popular.

“First, kids are smart. They know when it’s an uncle or a neighbour who’s dressed in disguise, but when it’s a complete stranger they get surprised and a bit confused.”

Also, many families simply don’t have a social network that they can tap into to find Santas, adds Susanne.

“We visit many families where it’s just mum, dad, one or two kids and no grandparents. There are also families with foreign backgrounds that do not have relatives here in Sweden.”

Renting a Santa costs between 300 and 600 Swedish kronor ($45 – 90) depending on what time of day you want him to knock on your door. (Tomteservice doesn’t do chimneys!)

Santa prime time is between 4 and 5pm, after the TV screening of the 1958 Disney Christmas special, known in Sweden as Kalle Anka och hans vänner önskar god jul (“Donald Duck and his friends wish you a merry Christmas”).

Millions of Swedes tune in to watch the show every year at 3pm on Christmas Eve.

So what have the reactions been so far today?

“Some small children get scared. But older ones are a bit sceptical.”

“You know, 10-year-olds really don’t want to admit that they believe in Santa Claus, but then they think it’s very strange when someone they don’t recognize, a complete stranger, shows up. They get confused.”

“But most kids are so focused on the presents that they just stare at the packages when I take them out of my sack and then they just stand there completely dumbfounded,” says Susanne.

In order to make the experience as credible as possible for the kids Susanne and her colleagues pay great attention to detail when it comes to their costumes.

“There is this stereotypical image of what Santa looks like. He’s supposed to be round and red-cheeked. So we copy that and every year we’ve improved our look.”

“We have had special Santa costumes made which we stuff with pillows. We paint our cheeks red with rouge. We carry lanterns and wear black boots, black belts and wigs with long, grey curls. And I’ve ordered beards made out of real wool for next year so we’ll look even more real then.”

“Some take a break from their own celebrations to deliver presents. Others are new in town and don’t have much of a social network. They tell me it’s fun to get to make other people happy at Christmas.”