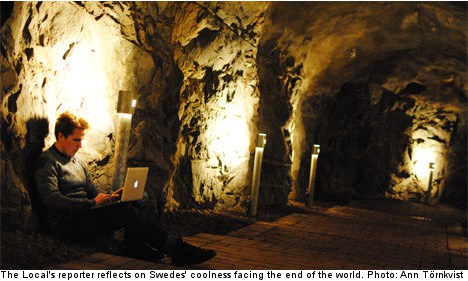 “No high alert ahead of the end of the world,” it proclaims.

“At the moment, we cannot see anything taking place on December 20th to indicate that panic will break out ahead of the end of the world.

While the words seem soothing, the agency nevertheless could leave an anxious visitor with a lingering niggle of doubt.

In other words, even Sweden disaster response authorities seem to admit that the apocalypse predicted by the Mayan calendar may indeed take place.

Luckily, I’m ready, even if most other Swedes may not be.

The air is stale here. It smells and tastes like dust. There is moss on the walls and water is dripping from the ceiling.

I am underneath the streets of Södermalm, in Katarinagaraget, part of a big network of tunnels stretching out across Stockholm.

Today, it houses hundreds of cars rather than people hunkered down to survive a catastrophe.

Like the Metro in Moscow, this is the place to be in the event of a nuclear war. And while the Mayan calendar doesn’t seem to mention anything specific about nuclear weapons, this feels like a good place to shelter.

The idea was, in the event of an atomic blast near Stockholm, that this shelter’s 5-tonne security doors would slam shut, keeping the radiation out and the people inside the tunnels safe.

Apparently, 20,000 people can survive down here.

If they have food.

If they have water.

And I’m here, because the world is supposed to end tomorrow. That is if you believe the hype on the web.

But apparently, not many Swedes do, as I don’t see anyone else scrambling to grab a spot next to me in this cavernous underground bunker.

From what I’ve been told, the Mayan calendar ends tomorrow. There is nothing after December 21st.

Some people out there are convinced the Mayans have got the right end of the stick and Friday really is the end of the world. Newspapers and social media sites are filled with stories about people getting ready for one final big bang, thinking the apocalypse is imminent.

According to The Guardian, the fear of the apocalypse has Russia firmly in its grip, with people stockpiling matches, candles, salt, and flashlights while they await the end of the world.

They exchange survival tips online, preparing for the clock to strike apocalypse-nowish.

But Swedes do not care.

“No one has called to ask if the world is really coming to an end. Most people that have been in contact with us have basically asked how to stay safe,” Civil Contingencies Agency spokesman Erik Löfgren tells The Local.

At least one caller, however, (that would be me, cowering underground), wants to know more about what he can do to prepare.

“No matter if you fear the destruction of the world, power outages, or any other threat, the key is to stock up on supplies,” explains Löfgren.

Simple enough, except I’m already in the bunker and all I have is my laptop.

I am also alone, a fact which emboldens me to venture back to the surface to stock up on supplies, but also to talk to others about why they don’t seem to care that there may literally be hours left before we are all obliterated.

My quick survey on the streets of Stockholm shows that many Swedes just cannot be bothered taking the Mayan calendar seriously.

“I don’t believe that the world will end tomorrow,” says 51-year-old Eva.

“But if I did, I would spend my last day on earth with my loved ones.”

Meanhile, New York-native Mike, 37, hasn’t prepared at all for the threat of imminent death and destruction.

“What do you do when the world ends?” he asks, pausing for a second before adding that he’d drink some wine and take up smoking again.

“I haven’t smoked for five years, but if the world ends who cares? Lung cancer won’t care,” he quips.

So why are Swedes unconcerned about the end of the Mayan calendar?

“I think that Swedes in general are used to basing their fears on scientific studies, rather than superstitions and mystical interpretations,” answers disaster expert Löfgren.

He doesn’t believe the hype either.

On that note, perhaps I should just head back to the office. Besides, it was rather boring underneath Stockholm.