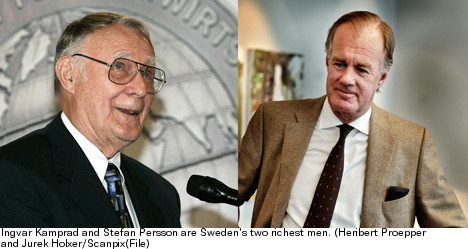 There was no change at the top of Swedish business magazine Veckans Affärer’s list of Swedes with a wealth of at least 1 billion kronor ($150 million).

Kamprad, the 86-year-old father of flat-pack furniture came in at number one with a fortune of 500 billion kronor.

The Ikea founder’s wealth dwarfed that of the second person on the list, former H&M CEO, Stefan Persson, who had an estimated wealth of a mere 175 billion kronor.

Antonia Johnson was number three on the list with a personal wealth of 48 billion kronor.

She heads the Axel Johnsson Group, which has interests in everything from energy to telecom and real estate.

CLICK HERE FOR THE TEN RICHEST BILLIONAIRES IN SWEDEN

Kamprad’s wealth makes him the fifth richest person in the world, according to the Bloomberg Billionaires Index.

Compared to last year, there are 11 more Swedish billionaires on Veckans Affärer’s list, the majority of whom have a wealth below 3 billion kronor.

Altogether, the 119 Swedish billionaires have a combined wealth of 1.3 trillion kronor, which corresponds to roughly 40 percent of Sweden’s gross domestic product (GDP).