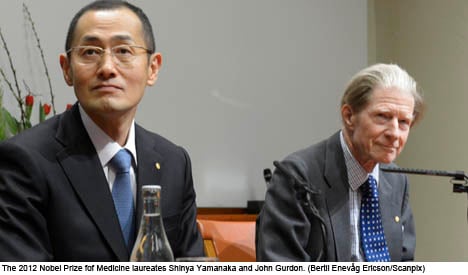 The assembly that awards the Nobel Medicine Prize said Friday it had never heard of a stem cell researcher who has filed a US lawsuit against it for allegedly crediting his work to this year’s laureates.

“We have not yet received any such lawsuit and have not, therefore, been able to assess it in detail. The name of the plaintiff has never been put forward to us previously,” the Nobel Assembly said in a statement.

Rongxiang Xu, a Los Angeles-based researcher who describes himself as the founder of “human body regenerative restoration science”, claims he made a key discovery credited to the Nobel winners a decade before they did.

He filed a lawsuit in California this week against the Nobel Assembly at the Karolinska Institute, which awarded this year’s prize to Shinya Yamanaka of Japan and John Gurdon of Britain.

They were honoured for their work in cell programming, a research area that has nourished dreams of replacement tissue for people crippled by disease.

In awarding the prize, the Nobel jury said: “Their findings have revolutionized our understanding of how cells and organisms develop,” and “created new opportunities to study diseases and develop methods for diagnosis and therapy.”

Describing his lawsuit as a first against the Nobel Assembly, Rongxiang Xu said he discovered “regenerative” cells in 1984 while studying treatments that have benefited 20 million burn victims in 73 countries.

Alleging libel and unfair competition in the suit filed in Orange County, southern California, he claimed his good reputation was defamed by the assembly, which is made up of 50 professors at the Karolinska Institute.

He argued the assembly’s statement “is false, as he was the scientist who made the discovery a decade earlier, therefore defaming his exemplary reputation,” said a statement announcing the lawsuit.