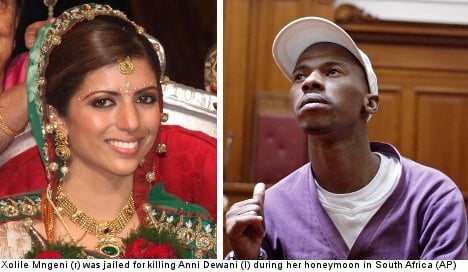 Sentencing Xolile Mngeni, 25, Judge Robert Henney told him he was a “merciless and evil person” who had “committed an act of premeditated murder and robbery with aggravating circumstances.”

Two other local men have been jailed over the killing and have claimed that Anni’s husband Shrien Dewani ordered the hit.

Mngeni was found guilty of firing the shot that killed Dewani who had been married for just two weeks when she was killed in November 2010, in what prosecutors say was a faked hijacking.

Mngeni, a suspected small-time drug dealer, plotted with two co-accused to carry out the murder for 15,000 rand (now $1,700), the court in Cape town heard.

“In the case of murder this court is obliged to impose a sentence of life imprisonment,” Henney said.

“In the case of robbery with aggravating circumstances, this court is obliged to impose a sentence of 15 years imprisonment.”

Dewani’s father, Vinod Hindocha, was present in court and stared at Henney with a blank expression as the judgment was read out.

Henney said he had taken into account the fact that Mngeni, who lived in a slum and had only a primary school education, came from a poor background and that he had been diagnosed with a rare form of brain cancer.

Mngeni had undergone chemotherapy, but there was a high chance that the tumour would recur in the future.

But the judge said it would be unfair and unjust to show leniency to “a merciless and evil person, who has consistently shown no remorse”.

Anni Dewani’s family had flown from London to Cape Town on Tuesday to hear Mngeni’s sentencing.

“I wanted to look into Mngeni’s eyes, to see, when he was sentenced,” Vinod Hindocha said on the steps of the court, “that is why I came all this way.”

Hindocha said the “full picture” would only emerge once Shrien Dewani came to Cape Town” to face his hearing.

“Me and my wife have not slept a night since Anni was murdered. Shrien holds the key to that.”

“We need all the questions answered so that we can move on with our lives.”

Hindocha said he and his family would fight on until they had justice.

On Monday a British court ruled Shrien was not yet fit to face extradition to South Africa.

Shrien Dewani was now a “husk” of a man who suffers flashbacks of the night his bride was killed, a British judge heard as he set the murder suspect’s extradition hearing for July.