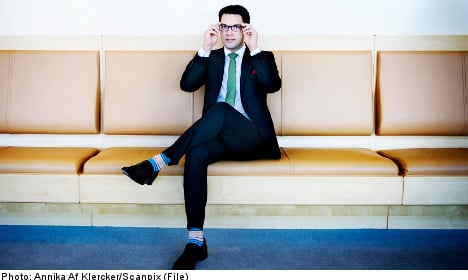 The political party preferences survey carried out by Statistics Sweden (SCB) – one of the most watched and respected voter polls in Sweden – showed that Swedish voters have more confidence in the far-right party than they did in May.

According to the figures released on Wednesday, the troubled party has the support of 7.9 percent of the voters, up from the 5.4 percent the party received in the SCB’s last survey in May.

The poll places the Sweden Democrats as Sweden’s fourth most popular political party, just behind the Green Party’s 8.6 percent, with the Moderates and Social Democrats at 28.1 percent and 34.8 percent, respectively.

Meanwhile, no other party saw significant changes besides the Social Democrats, which saw its support sink by 2.5 percentage points.

According to SCB, the Sweden Democrats’ rise is “statistically significant” compared to May and to the Riksdag election in 2010, where the party took home 5.7 percent of the votes.

The Party Preference Survey was carried out in November and was conducted by telephone interviews of a random selection of 8,999 people entitled to vote in the Riksdag election.

The interviews were conducted by telephone between November 1st and 25th, with 76 percent of the interviews taking place in the first half of the month.

Incidentally, the scandals that have swept the Sweden Democrats began November 14th, when the Expressen newspaper published a video filmed in 2010 that showed three party members in a drunken and racist tirade. Since then, the three men have stepped down.

On November 29th, Sweden Democrat MP Lars Isovaar stepped down after he his oinking and spitting attack at a security guard of foreign descent made headlines.

People were asked “Which party would you vote for if an election were to be held in the next few coming days?”