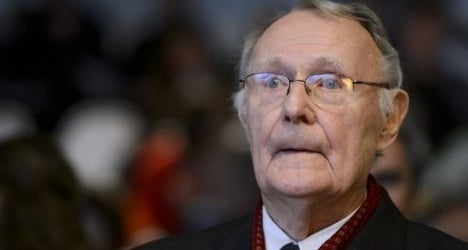 Kamprad, 86, told AFP in an email he had "always believed that keeping (Ikea) in private hands would give . . . more flexibility to develop
successfully, allowing a longer-term perspective on business development."

His comments were made ahead of the inauguration on Monday of a fellowship in honour of his late wife at the Federal Institute of Technology at Lausanne (EPFL).

Kamprad, who founded the unlisted, family-owned company in 1943, did not speak at the event to announce the Margaretha Kamprad Chair of Environmental Science and Limnology at EPFL.

He no longer gives interviews but did answer a few questions electronically.

"Staying private has been one of the key reasons for Ikea's tremendous success," he said.

The world's largest furniture retailer said last August that its trademark was worth nine billion euros.

The company, which only releases annual earnings reports, posted a 10.3-percent hike in net profit in 2011 to nearly three billion euros on global sales of nearly 25 billion euros.

Kamprad, who lives near Lausanne, was himself listed last week by magazine Bilanz as the richest man in Switzerland, with a net worth of up to 39 billion francs ($42 billion).

Per Heggenes, the head of the Stiching Ikea Foundation charity behind the fellowship inaugurated Monday, told AFP the magazine had mistakenly attributed to Kamprad the value of Ikea, which has a complex ownership structure through several foundations.

"Mr Kamprad does not own Ikea and is not the richest person in Switzerland," he said, also insisting that the Ikea founder's reputation for
frugality was no mere image stunt.

Kamprad, who is known to drive around in an old Volvo when in Sweden, fly economy class and even ride free Ikea buses when visiting his stores, "is personally not very interested in material goods," he said.

"He lives a frugal life because that is his nature," Heggenes said.

"He also believes that frugality, or constant cost consciousness, is another key value that has contributed greatly to Ikea's business success."