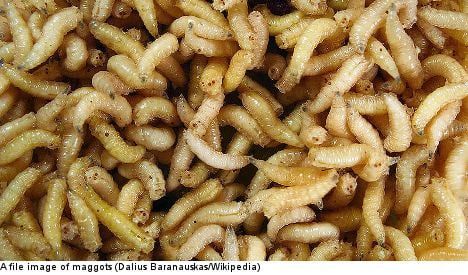 “We children think that dad has suffered mistreatment of the highest degree,” reads a complaint from the children of the 69-year-old man and filed with Sweden’s National Board of Health and Welfare (Socialstyrelsen).

“Maggots in a human wound in Sweden in 2012? Maybe in Ethiopia.”

The complaint, sent earlier in November, details how the man’s children found live maggots in a wound on their father’s foot during an August 2012 visit to the Carema-run Månstorps Ängar nursing home in Vellinge municipality in southern Sweden.

“The nurse who was supposed to put on a new bandage started to gag so much she had to leave the room,” the children wrote.

Less than two weeks later, the condition of the man, who suffered from diabetes and cardiovascular disease, had deteriorated to such an extent that a nurse felt he should be taken to the emergency room of a local hospital.

But the nursing home’s chief doctor ignored the nurse’s plea, explaining that the 69-year-old already had a scheduled appointment at the hospital in two days-time.

When the man was finally taken to hospital, more maggots were discovered in the wound on his foot, which had become black due to necrosis.

“The stench which filled the room was indescribable,” the man’s children wrote.

The following day, the 69-year-old’s leg was amputated above the knee due to bone rot. He died three weeks later.

The children’s complaint also describes how the man was made to lie in his own faeces for extended periods of time and suffered from serious bed sores they claim could have been avoided had staff at the nursing home been more attentive.

According to the complaint, a nurse told the children the facility had been struggling with staffing shortages.

A nurse also told the man’s children that during the summer, patients “should expect flies and maggots” in their wounds.

“For us children, this is completely impossible to accept,” they wrote.

Carema responded to inquiries about the incident in a statement published on Thursday explaining that the company had launched an internal investigation in order to “thoroughly examine whether someone failed to follow our procedures”.

According to Carema, Vellinge municipality’s chief nurse conducted a previous investigation which concluded that staff had “acted correctly”.

But the head of the municipal healthcare division, Catharina Byström, admitted staff could have handled their communication with the man’s family differently.

“Staff should have made an assessment about whether relatives to the person with the wound should have been informed at an earlier stage,” she said in a statement.

Carema has been singled out in a number of other high-profile incidents in the last year, ranging from unchanged diapers to poor working environments, as well as a report of a dementia patient having a role of tape stuffed in his mouth.

The scandals prompted an ongoing debate about the responsibilities of private companies operating in the Swedish healthcare sector, as well as concerns about tightened quality control of elderly homes.