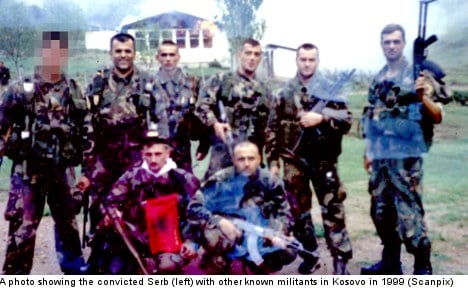 “The only explanation is that the court of appeal has thrown out the district court’s ruling,” attorney Bertil Schultz told the TT news agency.

Back in January 2012, Milic Martinovic, a then 34-year-old Serb who had been arrested two years earlier in Sweden, was found guilty of aggravated crimes against humanity, including murder, attempted murder and aggravated arson, all in connection with the massacre, the Stockholm District Court ruled.

He was sentenced to life in prison for his role in a massacre of 40 people in the village of Cuska in Kosovo in 1999.

Martinovic had allegedly been a member of the special PJP police force that entered Cuska on May 14th, 1999 in search of “terrorists.”

Armed and in uniform, he was among the troops who took a large number of people captive, killed 29 of the 40 people murdered there that day, attempted to kill three others, burned down houses and manhandled civilians, the court said.

But on Wednesday, the Svea Court of Appeal ordered Martinovic to be released, leaving the 35-year-old Serb dumbfounded.

According to Schultz, Martinovic didn’t know what to think when a guard opened his cell and said, “You can go now”.

It remains unclear exactly why the court of appeals elected to have Martinovic released. A formal ruling from the court isn’t expected until December 19th, according to TT.

The 35-year-old has claimed he was never in Cuska where the massacre occurred.

However, Martinovic can be seen in pictures posing with weapons with other considered to be responsible for the massacre.

“Milic Martinovic participated in the operation with the understanding that the aim was to murder and rob civilian Kosovo Albanians,” according to court documents.

Several survivors from the incident travelled to Stockholm to testify during the trial, one of the largest in Swedish legal history.

However, Schultz argued during the trial that the survivor’s testimony may have been politically motivated and clouded by the passage of more than two decades.

Krister Petersson, one of the prosecutors who tried the case said he was “extremely surprised” that Martinovic had been released, but added it’s too early to tell whether or not the case may eventually be taken to Sweden’s Supreme Court (Högsta Domstolen).

Martinovic, whose wife and three children reside in Sweden, was held on remand for an exceptionally long period of time – nearly two years, among the longest of any criminal suspect held in Sweden.

If he is ultimately acquitted by the appeals courts, he may be entitled to claim damages of up to 1.5 million kronor ($266,000) for wrongful imprisonment, according to Britt-Mari Lundberg from the office of the Chancellor of Justice (Justitiekanslern), which acts as an oversight body for the Swedish judicial system. 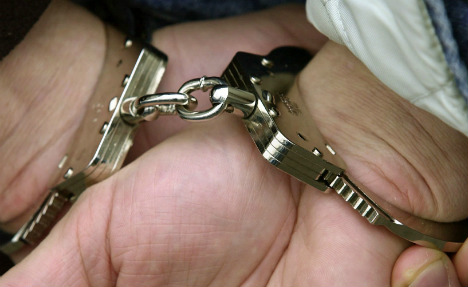 At the first trial in Germany for war crimes committed in Syria's five-year-old war, Aria Ladjedvardi, 21, told the court he “didn't want to be in” the incriminating pictures, and that he “could not imagine that they would be circulated on social media”.

Prosecutors have accused Ladjedvardi of a war crime as he had treated the unidentified victims “in a degrading and humiliating manner”.

The photographs in which Ladjedvardi appears were taken in the spring of 2014 and posted on Facebook. Federal prosecutors believe he and two fellow fighters took the pictures to belittle their victims, whom they considered infidels or non-believers.

They also believe that Ladjedvardin, a German of Iranian origin, travelled to Syria in early 2014 to join one of the jihadist groups engaged in the fight against President Bashar al-Assad's regime.

But Ladjedvardi, who risks at least one year in prison, contested the claims at the opening of his trial in Frankfurt, arguing that he was in Syria to help victims of Assad's regime.

According to Ladjedvardi, villagers in the province of Idlib were alerted to the gruesome scene of the severed heads by a child.

A crowd swiftly gathered around the macabre sight, and several people began posing for photos, he said.

Ladjevardi, who was the only foreigner in the group, said he was then forced to pose for a picture too.

“We were in a war zone… I did what I was required to do in the situation,” he told the court, speaking rapidly and with nervous gestures.

Ladjevardi then justified his trip to Syria, saying “I wanted to help the people”.

Although he said he had become more religious before his departure for Syria, Ladjedvardi denied being part of any jihadist groups.

Instead, Islam and sports helped him turn around his life, he said, after a youth marred by alcohol and cannabis abuse as well as delinquency.

Through Facebook, he contacted an acquaintance who had left for Syria and subsequently helped Ladjevardi in his journey there.

He admitted that he was given training in weapons usage, but insisted he was not part of any jihadist group and had no contact with jihadists throughout his trip to Syria.

The prosecution has been unable to determine which group trained the accused in weapons handling. Neither was it able to establish the identities of the beheaded victims and on which side of Syria's warring parties they belonged.

Ladjevardi was arrested in October 2015 in the Frankfurt region, after police raided his apartment. He has been in custody ever since.

German federal prosecutors are currently investigating 10 cases of alleged atrocities in Syria or Iraq, along with more than 30 cases of suspected membership of a terrorist group involving jihadists returning from the Middle East.

The investigations have gained momentum with the arrival last year of over a million asylum seekers, about 40 percent of whom fled the wars in Syria and Iraq.

Authorities dealing with their asylum requests have picked up and forwarded on average 25 to 30 tip-offs a day to prosecutors, in line with a German requirement that asylum applicants provide information on any war crimes they may have witnessed.