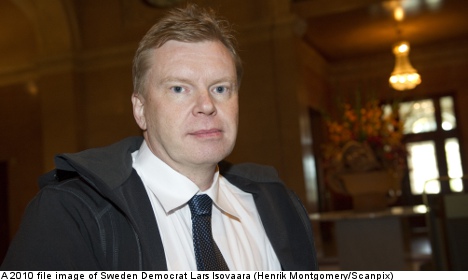 Isovaara also made grunting pig noises during the incident, according to the Expressen newspaper.

“He got annoyed at the guards who had immigrant backgrounds. ‘I don’t want anything to do with people like you,’ he said and spat in the air to make a point,” explained Torsten Stålnacke of the Stockholm police to the paper.

Officers were called to the Swedish Riksdag at 2am on Wednesday when Isovaara reported being robbed.

According to a statement from his political party, Isovaara fell foul of “two unknown people with immigrant backgrounds” who knocked him from his wheelchair and then took his backpack, which had his wallet inside.

The politician tried to get inside parliament afterwards but a safety guard asked him for ID, prompting the barrage of taunting.

“He even mimicked a pig in front of the guard, who thought it offensive,” police spokesperson Stålnacke told the paper.

The police officer on duty ended up reporting the politician.

Isovaara has not denied the police’s claims.

“It may well have been that I was rude to the guard, and I am truly sorry about that,” he told Expressen.

“I was in a bad state of mind after what had happened. As the police say I acted that way, it must have been the case.”

The news of the incident broke just hours after prosecutors dropped a hate speech investigation against three of Isovaara’s Sweden Democrat colleagues.