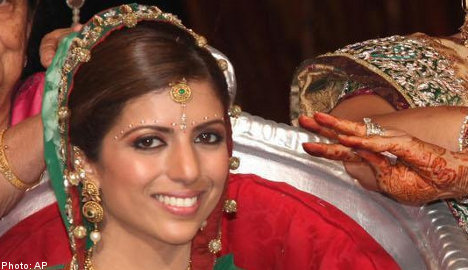 “I’m satisfied that the accused has committed the crime of murder,” Judge Robert Henney told the High Court, delivering the verdict against Xolile Mngeni.

Dewani, a Swede of Indian origin, had been married for just two weeks when she was killed in November 2010, in what prosecutors said was a faked hijacking.

Henney told the High Court that Mngeni, a suspected small-time drug dealer, had plotted with two co-accused to carry out the premeditated murder for 15,000 rand (now $1,700).

Henney convicted the 25-year-old of firing the shot that killed Dewani, robbery with aggravating circumstances and illegal possession of a firearm and ammunition.

Dewani’s husband Shrien Dewani is accused of orchestrating the hit, but has protested his innocence and is fighting extradition to South Africa.

The judge did not rule on Shrien’s alleged culpability, focusing on the role of Mngeni.

Dewani was killed by a single gunshot while travelling in the back of the car with her British husband.

“During this incident, the deceased was shot once through the neck by the accused as a result of which, she died,” said Henney, who said the co-accused had planned the murder to appear a car hijacking.

Two local men already jailed over the killing and have fingered Shrien as their paymaster.

Mngeni, who has undergone surgery for a brain tumour and needed a walking frame to move to and from the dock, appeared unmoved as the verdict was handed down.

He had pleaded not guilty to killing the bride, but admitted that his palm print was on the car in which Dewani’s lifeless body was found in a poor Cape Town township and had also pointed out key scenes to police.

The judge dismissed Mngeni’s version of the night’s events as “riddled with improbabilities, inconsistencies and untruths” and his testimony as “dishonest”.

The Swedish tourist was found with her hands tucked under her chin, on her right side on the back seat of the car belonging to taxi driver Zola Tongo, who is serving 18 years for his role in her death.

Mngeni had denied knowledge of having multiple phone calls with co-accused Mziwamadoda Qwabe — who was jailed for 25 years after entering a plea bargain — over the weekend of her killing.

But the judge said Qwabe had proven a stronger witness than Mngeni whose credibility he repeatedly shot down.

“The accused did not take the court into his confidence during the course of the trial,” said Henney.

“The only answer he could give against the mountain of evidence against him ranges from a bare denial of the allegations, a rather late revelation of an alibi which proved to be unconvincing.”

Mgneni’s arguments against why he was found in possession of items stolen during the killing, some of which were found in a friend’s shack where he had spent the night, were also thrown out.

He was acquitted on a charge of kidnapping, with the motive of the attack ruled as having been murder.

Shrien Dewani is being treated at a secure mental hospital in the southwestern English city of Bristol ahead of a court decision on his extradition.