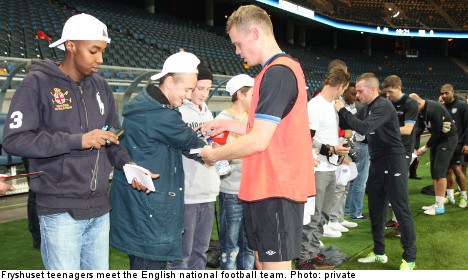 “They don’t do it every time. But we suggested it to the FA (English Football Association) and they talked to the team and lobbied them a little bit,” Anna Coyet from the British Embassy told The Local.

In cooperation with Fryshuset, a youth centre based in Stockholm, 25 teenagers between 13 and 20 years old, were invited to watch the English football team train on Tuesday evening. The training session took place in the recently opened Friends Arena, where the game will be played on Wednesday night.

“They first watched the training for about an hour and 15 minutes. After that they got a chance to talk to the players and get their autographs as well as some photos,” Coyet said.

“The players went by all the kids one by one. No one snuck back to the dressing-room,” she added.

The kids were excited to meet the international players.

“I love Liverpool and I really wanted to meet Gerrard,” one of the teenagers told the embassy staff.

Meeting the players and getting their autographs was a definite highlight. However, being able to be in the new arena was an added bonus.

“It was awesome to be allowed to go to the new arena and to meet the whole English national team,” another visiting teenager said.

The England-Sweden friendly will be played in the Friends arena, in the Solna district of Stockholm, at 8.30pm on Wednesday.

Since June 18th, all arrivals from the UK have had to quarantine for five days and take two coronavirus tests under Italian health restrictions.

To stop people from attempting to make the trip regardless, “a specific ticketing policy has been put in place” for Saturday’s last eight tie, the Italian interior ministry said in a statement.

UEFA, at the behest of Italian authorities, blocked the sale and transfer of tickets from Thursday night, and also cancelled tickets sold to UK residents from midnight on Monday.

The number of blocked or cancelled tickets was not given.

England’s governing Football Association (FA) was entitled to a ticket allocation of 2,560, equating to 16 percent of the permitted capacity of 16,000 at Rome’s Stadio Olimpico.

Andrea Costa, Italian undersecretary of state for health, repeated on Thursday that any person arriving from Britain would face five days of quarantine.

“That will not allow fans who have left over the last couple of days to come and see the match,” he told Radio Capital.

“We’ll be vigilant on this quarantine, we’re not talking about a big number so the checks will not be difficult.”

The English FA has said it was working with UEFA and the British embassy in Rome to “facilitate” ticket sales to England fans resident in Italy.

But the British Embassy in Rome confirmed to The Local that it “is not selling or distributing tickets for the match on Saturday in Rome”.

The confusion on Wednesday left Italy-based England fans scrambling to find out where they could buy tickets.

READ ALSO: Covid cases on the rise in Europe once again as WHO warns of Euro 2020 risk

British government advice is fans should not travel to Italy, an “amber list” country requiring 10 days of self-isolation upon return.

The UK is experiencing a surge in new coronavirus cases, blamed on the Delta variant that was first detected in India.