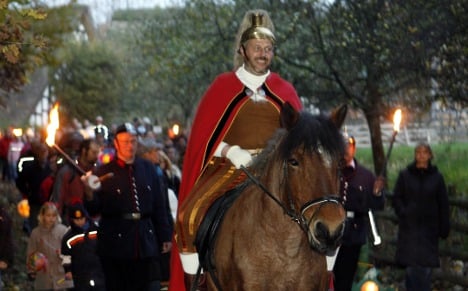 Although the tradition of children parading through the streets with lanterns is still popular across Germany, it has lost some of its magic for many schools and nurseries because they have had to give up the traditional horse and rider, the regional Westdeutsche Allgemeine Zeitung (WAZ) newspaper wrote on Friday.

Stricter rules were introduced for public gatherings after the Love Parade catastrophe in 2010 – in which 21 people were killed in am overcrowded tunnel – meaning few can now afford to wade through the paperwork and additional costs associated with hiring a horse for the occasion.

“For the first time we don’t have a band, a horse, or a Martin,” a mother from a Catholic kindergarten in the Frintrop area of Essen told the paper.

“We need written permission for the horse and we have to prove we have third party insurance for it,” said Simone Findt from a nursery in the Rütterscheid area in Essen, adding she got help from parents with the mound of paper work. In a further safety measure, the horse had also to be surrounded by three people at all times, she said.

Such was the shock immediately after the Love Parade tragedy in neighbouring Duisburg in July 2010 that many in Essen cancelled their parades altogether that November, wrote the paper. But despite stricter rules, they seem to be back in full swing this year.

“In 2010 lots of people [in Essen] cancelled their St Martin’s day parades. In 2011 there were about 200 of them, and the same this year,” said Michaela Lippek from the coordination centre set up in Essen after the Love Parade tragedy.

Special permission is also needed to sell Glühwein to parents and, of course, strict safety measures had to be observed if a bonfire was built. “If that’s the only way to prevent an accident happening, then that’s ok,” said Findt.