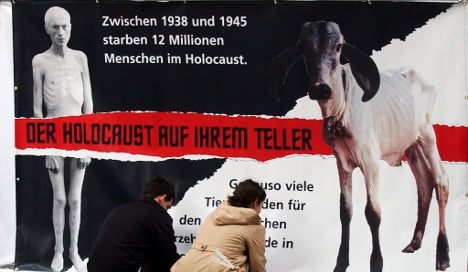 One of the banned posters - in Switzerland. Photo: DPA

The seven posters in question made up part of a 2004 Peta campaign, which outraged many in Germany and was banned by the courts before it was unveiled to the public.

The group had planned a campaign in Germany called “The Holocaust on your plate” which juxtaposed photos of victims of the Nazi extermination camps directly opposite pictures of animals from modern mass intensive livestock farms.

Under the headline “living skeletons”, Peta had wanted to shock the German public with posters showing emaciated, naked camp inmates next to starved cows, the Süddeutsche Zeitung newspaper said on Thursday.

Another showed piles of corpses next to piles of slaughtered cows under the header “final humiliation.” “If animals are concerned, everybody becomes a Nazi,” read one other.

The Central Council of Jews in Germany complained and the German courts intervened to ban the campaign before the posters were used in public.

An appeal by Peta was rejected in 2009 by the German Federal Constitutional Court, which said the comparison of cruelty against animals and humans “trivialized and made banal the fate of the Holocaust victims” and contravened the rights of Jews alive today.

Peta took its appeal to the highest European level, arguing to the ECHR in Strasbourg that it contravened the organization’s right to free speech as laid down in the European Convention on Human Rights.

But in a ruling on Thursday the ECHR found this was not the case, and that the German ban was justified considering the “specific context of German history.”

“While holding that the intended campaign did not aim to debase the depicted concentration camp immates, the [German] courts had considered that the campaign confronted the plaintiffs with their suffering and their fate of persecution in the interest of animal protection,” the court said in a statement.

“In that light, the Court found that the German courts had given relevant and sufficient reasons for granting the civil injunction.”

The Central Jewish Council in Germany welcomed the ECHR ruling.

“The judges were right to conclude that the injunction does not violate freedom of expression but that this poster campaign trivialises the Holocaust in an irresponsible manner,” council president Dieter Graumann said in a statement.