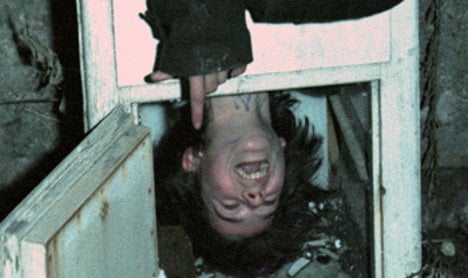 With flute, clarinet, harp, piano, and percussion, the five members of the Berlin based ensemble Adapter perform the works of young experimental composers in a chamber music setting. For the upcoming instalment of their “Rotation” series, the German/Icelandic musicians focus their gaze on works by Israeli composer Yoav Pasovsky. Catch the concert Thursday night at ExRotaprint, a former printing press factory in Wedding.

In the early 1980s punk culture was everywhere. Spiky haired boys and girls in cut up t-shirts and combat boots hung around smoking cigarettes and banging out chords on electric guitars in cities around the globe including Weimar, Leipzig, Berlin, and other points east. In a society where conformity was the rule, the punks in East Germany embodied rebellion. See photographs of punks in 1980s GDR at an exhibition opening Thursday night at the Staatsgalerie Prenzlauer Berg. With works by Sabine Bading, Brigitte Bludau Munroe, and others, the show is part of the European Month of Photography.

British biophysicist Rosalind Franklin’s research in the early 1950s was critical to the discovery of the DNA double helix. But as a woman in a man’s world, she didn’t get the recognition she deserved until much later. Anna Ziegler’s play Photograph 51 offers an interesting view of the male-dominated scientific world of the 1950s. English Theatre Berlin brings their production back for part three of their “Science and Theatre” programme this week.

One blonde. One brunette. Loads of glamour, mystery, and sex appeal. All with a French accent. The ladies of Brigitte have concocted a recipe irresistible to those who prefer their indie-pop mixed with a little hippie-chic glam-camp. Aurelie Saada and Sylvie Hoarau saunter up to the mic Tuesday night in Cologne.

Movies about an orchestra conductor, a group of transvestites, and World War II comprise three Russian films being shown with English subtitles this week in Cologne. The topics vary widely but one thing these Siberian flicks all have in common is their heritage – they were all made by Russian directors. Consider the series a little Molotov cocktail of current Russian cinema.

“Do you wanna have fun? How’s about a few laughs?” You know the tunes, even if you’ve never seen it before. With music by Cy Coleman and choreography by Bob Fosse, Sweet Charity opened on Broadway in 1966. Now English Theatre Frankfurt is staging the entertaining tale of “Charity,” an optimistic night club hostess trying to make a more respectable life for herself. Go and have some fun with the feisty cast this week in Frankfurt. The laughs start on Tuesday.

Sharpen those blades and lace up those skates! It’s time to hit the ice. Skate backwards, cut a few figure eights, or clutch the sides of the rink and take itty bitty baby steps at the Frankfurt Ice Sport Hall. The skating centre is offering free admission and special activities for kids on Saturday. Let the winter sporting season begin!

Christian Lacroix loves working in the theatre. Prefers it actually. And the great fashion designers’ costumes for the Hamburg State Opera’s new production of Madama Butterfly are more ravishing than anything you might see on a runway. See what colourful creations the French couturier concocted when the Puccini masterpiece opens in Hamburg on Sunday.

If you’re living in Bavaria, or even just visiting the picturesque German region, you might as well learn a few traditional dance steps. In anticipation of Saint Katherine’s Day, when Catholics are allowed to take one last spin around the dance floor before getting all quiet and contemplative for Advent, the Hofbräuhaus is offering free dance lessons. Don your dirndls and lederhosen and join the light steppers Thursday. A live band provides traditional German folk music.

White gowns, net veils, cakes, flowers, favours, oh my! The TrauDich! Wedding Fair taking place all weekend long at the Olympia Park Event Arena in Munich is a bride-to-be’s dream event. Go and scout out everything you need for the big day, and check the programme for fashion shows, make-up shows, dance classes, and presentations on everything you’ll need to know to plan the wedding your friends and family will be talking about for decades.

The Nuremberg Paper Theatre presents “Ferdinand the Bull” this weekend at Gasteig. The kids will marvel at the paper animal puppets as they follow Ferdinand’s journey through Spain where he meets his animals friends the bee, the pig, the cat, and the goat. Music by Debussy, Rossini, Honegger, and others add to the magical scene.