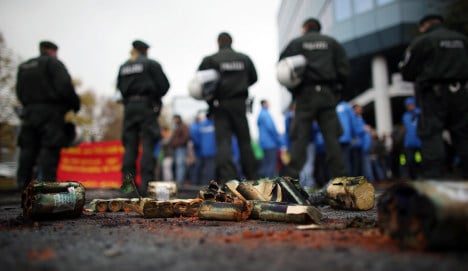 The workers had driven to the factory across the border from their factory in Genk in eastern Belgium, to Niehl near Cologne, to the Ford factory where a meeting of the international works council was scheduled for Wednesday to discuss the closure.

The situation escalated shortly after they had arrived early in the morning, a police spokesman confirmed, as 20 to 40 protesters broke into the factory building, smashing windows and setting off fireworks which set fire to police car tyres.

More than 100 police then arrived, according to the Kölner Stadt Anzeiger newspaper. The group then left the building of their own accord. Police regained control of the situation, kettling the workers and taking their details.

Ford has not yet lodged a formal complaint with the police, the paper said – but the firm is consulting authorities about what to do next. Police said they believed the protest action was spontaneous.

Last month Ford said it would close down the key plant by 2014 along with two facilities in Britain in a bid to steer its European operations back to profit after running at a predicted loss of €1.2 billion. The closures will entail the loss of up to 6,200 jobs, equivalent to 13 percent of Ford’s European workforce.

Ford is also engaged in talks with the representatives of the Belgian government and trade unions who reject the decision to shut down the factory.

The workers at Genk set fire to cars in front of their factory at the end of last month at protest to its closure.