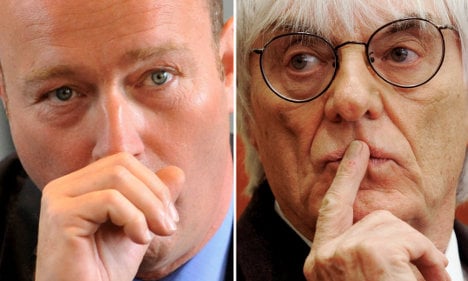 Gerhard Gribkowsky, then BayernLB board member, negotiated the sale of the bank’s roughly 50 percent stake to Ecclestone, with whom he was on first name terms. He later secretly received $44 million from Ecclestone, apparently through a foundation belonging to Ecclestone’s then wife, the Süddeutsche Zeitung reported on Thursday.

Gribkowsky was put on trial in Munich, where he admitted that the money had been a bribe, and was sentenced to eight and a half years in prison in June. The 54-year-old ex-banker also testified against Ecclestone, which resulted in Munich state prosecutors opening an investigation into Ecclestone’s culpability.

But the bank was also given access to the prosecutor’s files on Ecclestone, the contents of which have apparently led them to make the huge compensation demand for compensation.

BayernLB acquired the stake in Formula One after the 2002 bankruptcy of Leo Kirch’s media group. Gribkowsky, who was responsible for the bank’s relevant department from 2003 to 2008, told investigators that he could have got more for the bank than the $756 million price it eventually received for its stake, according to the Süddeutsche Zeitung.

In retrospect, the shares were probably worth significantly more, Gribkowsky said. In June, the Wall Street Journal reported that industry insiders in 2005 estimated the company was valued at between $2 billion and $4 billion.

Gribkowsky also said that he had paid Ecclestone an extra kickback worth $66 million – which the bank is also demanding back – and that Ecclestone had offered him a job as an advisor.

Ecclestone has said repeatedly that he only gave Gribkowsky the $44 million because the banker was blackmailing him. He also maintains the Bavarian bank got a “very good price” for its stake in Formula One.

The 81-year-old Ecclestone is still the sport’s chief executive and retains a large shareholding.