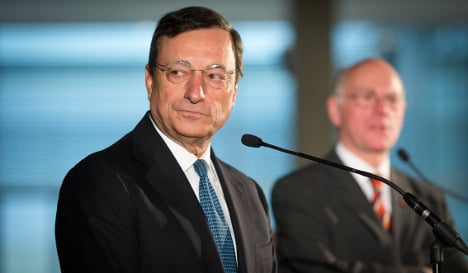 “The ECB’s new measures help to guarantee price stability in the eurozone,” ECB President Mario Draghi told a closed session of the Bundestag lower house of parliament, according to a copy of his speech, in a direct attempt to soothe the fears of many German politicians.

The OMT programme, under which the ECB will buy unlimited amounts of the bonds of struggling countries to bring down their borrowing costs, “will not lead to inflation,” Draghi stressed.

The ECB head, who rarely speaks to lawmakers in EU member states, defended his strategy of bond-buying from the eurozone’s hardest-hit nations during a two-hour grilling from German MPs.

He said the plan was needed so that weaker nations could benefit from the ECB’s low interest rates and that the bank would buy unlimited amounts of the bonds of countries with high borrowing costs – but only if they first applied for a bailout from the EU and accepted tough reforms in return.

The plan is widely credited as providing a turning point in the three-year eurozone debt crisis, but was attacked by many politicians in Germany, who fear it will lead to inflation and price instability.

Others, notably the country’s top economic institutes, have also raised the fear that the programme would stoke inflation, to which Germany is particularly sensitive given its experience with hyperinflation leading up to World War II.

The Berliner Zeitung newspaper commented: “An Italian is coming to Germany to assuage the fears of Bundestag members about inflation. Mario Draghi … can only lose this battle.”

“The Germans won’t let their inflation trauma be treated by anyone, let alone a southern European,” added the paper.

But Finance Minister Wolfgang Schäuble rode to Draghi’s defence, telling the Die Zeit weekly that “to accuse the ECB of being unaware of stability is to ignore reality. It is acting within its mandate.”

However, in an unprecedented move, the head of Germany’s powerful central bank, Jens Weidmann, expressed his displeasure in a written statement, distancing himself from the programme.

Weidmann fears that intervening on the bond markets to lower borrowing costs of the likes of Spain and Italy is tantamount to monetary financing – printing money to aid governments – which is expressly forbidden by the ECB treaties.

He also said that such actions would reduce the incentives for debt-wracked countries to make the reforms and cuts necessary to regain the confidence of the markets.

Meanwhile, senior German economist and ECB executive board member Jörg Asmussen denied reports in Wednesday’s Süddeutsche Zeitung newspaper that Greece would be given an extra two years to fulfil conditions laid down by the troika – the EU, ECB and the International Monetary Fund – for new rescue loans.

The report said Athens would be allowed to cut its deficit to three percent of its gross domestic product in 2016 instead of the previous deadline of 2014. The deadlines given to Greece to implement reforms to its job market and in the energy sector, as well as privatisations would also be relaxed, the newspaper said.

“So far the troika has reached no final agreement with the Greek government,” Asmussen told German television. “There’s progress in Athens. But we’re not there yet.”

Draghi also confirmed this, telling reporters the international review of Greek reforms needed to unlock more aid had not been completed.