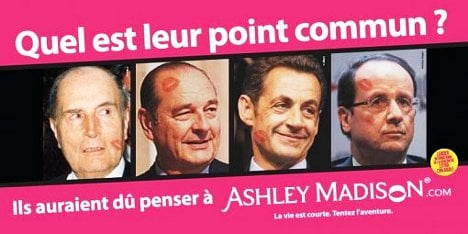 "What do all these men have in common? They should have thought of AshleyMadison.com," runs the strapline of the cheeky ad, which shows all four French heads of state, their faces plastered with lipstick kisses.

The dating website said it had tried to post giant banners guerilla-style at two Paris crossroads to mark the launch of its French site, after the ads were turned down by billboard groups as "too political".

But it was prevented from doing so by police, presumably tipped off by advance press coverage, said a statement from the firm, which resorted instead to hanging a three by six-metre (10 by 20-foot) banner from the Bir-Hakeim bridge.

"France is the home of infidelity in the eyes of the world," said Noel Biderman, founder of the site, which is aimed overtly at married individuals and whose slogan is "Life is short. Have an affair."

"We waited until we had the perfect platform to bring the French what they were missing: discretion," he said in the French-language statement.

"Photographs of presidents are in the public domain," added a spokeswoman for the company, Helene Antier.

Founded in Canada in 2002, AshleyMadison.com claims some 16 million users across 25 countries. It is banking on 2.5 million French users within 12 months.

Of the French leaders its campaign cites, late president Mitterrand is famous for leading a double life, fathering an illegitimate daughter, Mazarine Pingeot, whose existence became public shortly before he died in 1996.

Both Chirac and his wife Bernadette have acknowledged the former leader's infidelities.

Sarkozy has been repeatedly dogged by rumours — never publicly confirmed — of infidelity, concerning his first and second marriages, as well as his current relationship with Carla Bruni-Sarkozy.

And Hollande, France's current leader, is held to have begun his relationship with first lady Valerie Trierweiler while he was still officially with the Socialist politician Segolene Royal, the mother of his four children.