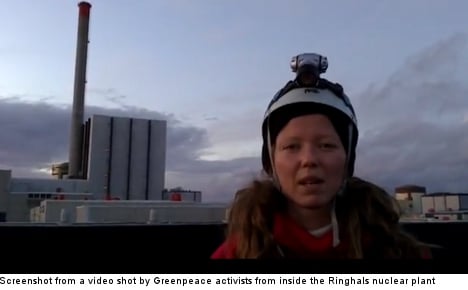 “I have been here for almost 27 hours,” said activist Isadora Wronski to newspaper Aftonbladet from within the Ringhals nuclear plant in southern Sweden early Wednesday morning.

The activists had been able to log on to social networking site Twitter and had spent time talking to the media.

The Local reported on Tuesday how some 20 activists had managed to breach the restricted areas of Ringhals on bicycles. At the same time several activists broke into Forsmark plant, on the east coast.

According to Aftonbladet, the activists climbed a roof within the restricted area with the help of a ladder and subsequently hid under a tarpaulin.

Apart from a helicopter hovering over them for a while on Tuesday, they say they have managed to move around unimpeded.

“We haven’t seen any guards or police today. We think that the workers have gone back to work. When we look down towards the reactors we see no security at all,” said Wronski to the paper, adding that there is Swedish nuclear plant security is in a state of crisis.

According to Wronski there is nothing to indicate that security personnel at the plant have detected the activists or are even looking for them.

“We have food enough to manage and we can stay here until (minister for the environment) Lena Ek decides to shut down the Swedish reactors,” said Wronski.

Later on Wednesday it also emerged that Greenpeace activists had also managed to remain in the Forsmark nuclear plant since 5am on Tuesday morning.

“It’s totally bizarre for me that I, as a regular person, without any special knowledge, not in very good shape and without any special equipment, can gain access to such an important place,” an activist told the TT news agency from within Forsmark.

While two activists were arrested inside Forsmark around 10.30am on Wednesday, two additional activists remained in the facility as of 1.30pm, according to Greenpeace.

Police continue to search the area in hopes of finding the remaining activists.

At first, police were surprised when Aftonbladet called to say there were still activists inside the restricted areas of Ringhals:

“We’ll have to look into it. Do they want us to find them? I don’t suppose they will come out, in that case?,” said local police officer Stefan Dahlhielm to the paper.

Ringhals spokesperson Gösta Larsen is not convinced that the activists are really on the premises:

“I have been told that there are people who claim to still be here at Ringhals. That’s a hypothetical question. Anyone could call and say that they are without actually being here. We don’t think they are. Police have searched the area with dogs and equipment,” said Larsen to the paper.

”But of course it is possible, Ringhals is not a small factory. It has a lot of buildings, dumpsters and other things, so they could be hiding somewhere. I guess we’ll have to keep looking.”

According to daily Expressen, four activists were arrested at Ringhals by 9.30am on Wednesday morning.

Police will now carry out a more extensive search of the area.

Following reports that the activists had managed to evade capture, Sweden’s environment minister planned a meeting with the country’s nuclear energy regulator and power plant operators on Wednesday after activists on Tuesday were able to break into two nuclear plants.

“I have asked the authority responsible … and owners Vattenfall and Eon to come see me (on Wednesday) to explain themselves,” Environment Minister Lena Ek told news agency TT.

“Now it’s a peaceful stress test, done with great care, but it’s clear that if someone had wanted to threaten the security of Ringhals, that would have been totally possible from where [the activists] were positioned,” she told TT.