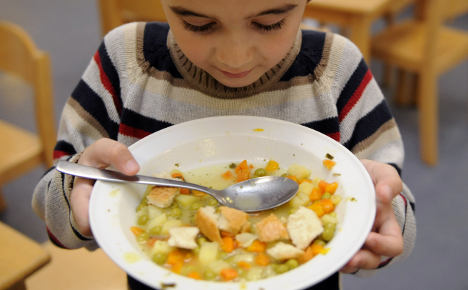 The company Sodexo said the certificates can be redeemed for books, learning supplies or tutoring sessions.

“We can well understand how the children and their parents must have felt in recent days, and we deeply regret the trouble caused by what happened,” the statement read.

A sample taken from a batch of frozen strawberries provided by one of the company’s suppliers showed evidence of norovirus contamination. Sodexo said it was planning to stop working with the Chinese distributor and would wait for an independent evaluation before resuming cooperation with the company.

The government-run Robert Koch Institute and the Federal Office of Consumer Protection and Food Safety said the strawberries caused an outbreak of diarrhoea and vomiting that affected more than 11,000 people in the states of Brandenburg, Berlin, Saxony, Saxony-Anhalt and Thuringia during late September.

Sodexo’s statement is in contrast to an earlier one which questioned its responsibility for the sick children. “Less than five percent of all the schools we deliver to have sick children,” company spokesman Stephan Dürholt said on Friday, September 28.

“We presume that the cause of the illness is a norovirus outbreak, which we have nothing to do with,” Dürholt said. “The reason that almost all of the children ate food from our kitchens is simply because we deliver food to a lot of schools.”

The frozen fruit had been imported from China. German Consumer Minister Ilse Aigner told the Wednesday edition of the Augsburger Allgemeine that there was ample evidence the strawberries were contaminated in their country of origin – and urged Chinese authorities to conduct an investigation.

In an interview with the Frankfurter Allgemeine Zeitung, a trade supervision official in the Chinese port city of Qingdao cautioned against rushing to judgement, saying there was no evidence that the outbreak of gastro-intestinal disease could be traced back to contaminated strawberries from China.