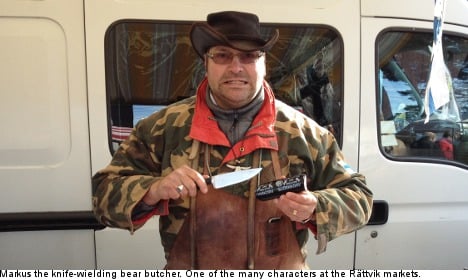 Due to a healthy dose of bad timing, I ended up in Rättvik instead of Rome this weekend. But who needs Roman ruins when you can have Rättvik’s markets at your fingertips?

Two Swedes had invited me, a wayward Australian, on a day trip into the Swedish heartland to experience something they said would be “typically Swedish”.

So, there I was on the road at seven in the morning with Inger, a blonde Swede with a sixth sense for finding a good set of markets, and Mats, her less enthusiastic husband.

We were driving north towards Gävle on Sweden’s east coast, then inland toward Rättvik, a small town on the edge of Sweden’s sixth biggest lake, Lake Siljan, right smack in the middle of Dalarna.

“This is the biggest market in the whole of Sweden,” said Inger, barely concealing her excitement.

“But we somehow end up there each year anyway.”

Like Mats, I was no fan of markets, but I wasn’t going there for the shopping. I was there to be part of the hordes and to witness a Swedish tradition, first hand.

And I was immediately glad I went. One step into the stall-covered streets of Rättvik and you get swallowed up by the crowd, with vendors calling out in drawn-out Dalmål-accented Swedish.

CLICK HERE FOR A PHOTO GALLERY OF RÄTTVIK AND ITS MARKET

“Come and get your spiced pig-blood, keep those deer away,” one man yelled.

This I had to see.

A local family, the Sundins, were selling homemade pig-blood pouches for keeping wild animals away from your garden. Apparently the smell is so strong that deer, boar, and hares think an animal has been freshly slaughtered and keep well away.

Mr. Sundin himself looked at me in wide-eyed wonder when I told him I’d actually quite like to see a deer in my garden.

“Well then you’ve only got yourself to blame when all your plants are eaten,” he said.

I moved on, and soon got chatting to a beekeeper called Björn who was selling flavoured honey and cursing the European Commission for ruling that he couldn’t call his honey “honey”.

“It’s typical of them – they’re always meddling,” he told me of bureaucrats in Brussels as I scoffed down yet another spoonful of his alcoholic “honey”, which tasted rather potent indeed.

“This one is whisky honey, or as I call it – Whisky BiqupeMums (‘Whisky Bee-Hive Yum’). It tastes good, no? Take one more spoonful for the road.”

It sure did taste good and I sure did take another for the road. His honey, or rather his Bee-Hive Yum mix, was blended with whisky, punch, saffron, coffee…you name it.

The alcoholic versions were the perfect antidote to the autumn chill, and I wasn’t the only person to realize it.

A few stalls along was Markus the butcher who was dressed as a hunter and was cutting slices of bear meat for his customers.

When I asked if he caught the bears himself, he said “perhaps”, adding that he “just maybe” kept his rifles in the van behind him.

I laughed nervously (one should always laugh at the jokes of a knife-wielding bear hunter) and he gave me a wink and some free elk sausages to remember him by.

I later learnt that the Rättvik market is, indeed, a big deal. In fact, on average 100,000 people flock to the town for the experience, a spectacle that has continued ever since the first markets in 1891.

Nowadays, the markets run for three days, twice a year – once in spring and once in autumn.

If the shape of Sweden was a woman, and a rather odd-shaped woman she would be, then Rättvik, population 5,000, would lie smack bang in the middle of her narrow waist.

Consumed by thoughts of Sweden’s waist and with the taste of whisky still on my lips, it was suddenly time to leave.

I asked some typical “Svenssons” if they agreed.

“It’s Sweden’s biggest disappointment, for sure,” said Danne to me, as his girlfriend laughed in agreement.

“I don’t even know why we come. We’re here every year; we walk in, glance around a bit, and then leave. It’s just become a tradition and Rättvik is quite nice.”

And he was right; Rättvik itself is stunning. The day trip was worth it even without the markets.

As we met up with Inger and Mats, their bags overflowing with the fruits of their shopping, we compared tales of the day.

Mats was particularly pleased with himself, with a huge haul that included kitchenware, socks, a bag, and a raincoat. He was fresh and rosy-cheeked from the crisp autumn day.

“What a day! Look at all this stuff,” he told me, grinning.

“But didn’t you say these markets were Sweden’s biggest disappointment?” I asked.

He looked at me, swinging his loot.

“I didn’t say that. I’d never say such a thing about the Rättvik markets,” he said, with a casual wink.

I still don’t believe him.

But in any case, I left the markets with fond memories and a bag full of moose meat. In fact, the Rättvik markets had left me dizzy with the pleasure of a day well spent.

Then again, of course, it could have been the honey.