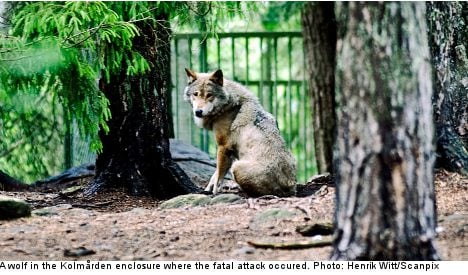 When the zookeeper was killed by the wolves at Kolmården in June 2012, management at the park said the incident happened without warning or provocation.

However, a 2011 incident report reveals that the wolves had previously threatened a zookeeper who entered the wolf enclosure alone, the Aftonbladet newspaper reported.

In the report, the zookeeper tells of being encircled by the wolves, who were behaving ever more threateningly.

“I screamed and made a lot of sudden movement. But it felt like that just triggered them even more,” the report reads.

The zookeeper became frightened and hit one wolves with a shovel – but the blow had no effect.

In the end, the zookeeper managed to escape from the enclosure.

Mats Höggren, zoological head at Kolmården, said that “thorough assessments and analyses” were carried out following the incident.

“The measures we implemented were to be more careful and make note of behavioural deviations among those particular individuals,” he told Aftonbladet.

Kolmården said the incident didn’t result in any major changes to procedures.

”All incidents have been documented and investigated according to existing regulations,” the animal park said in a statement.

On Monday, Kolmården will provide answers about the fatal June attack to the Swedish Work Environment Authority (Arbetsmiljöverket), the agency responsible for investigating work place fatalities.

In the report detailing the circumstances surrounding the accident, Kolmården is expected to present the measures it has taken to prevent similar incidents from occurring in the future.

An autopsy from the fatal attack has been completed, but the police’s preliminary investigation into the fatal wolf attack is not yet complete.