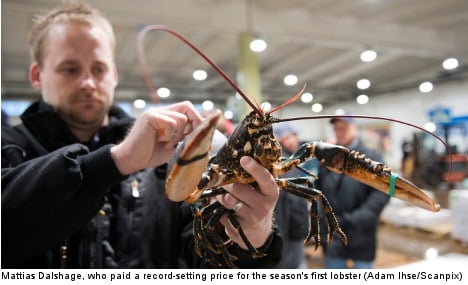 The price, called out by the highest bidder at the famed Gothenburg Fish Auction (Göteborgs Fiskauktion), was more than triple the 31,600 kronor per kilo paid for the season’s first lobster last year.

The decision as to which lobster crate goes under the hammer first is determined by a lottery among the boats who hauled in Sweden’s first lobster catch on Monday, the opening day of Sweden’s lobster fishing season.

And it was Mattias Dalshage, the head of Grundsunds Fisk on the island of Hönö in Gothenburg’s northern archipelago, who called in the winning bid at auction on Tuesday morning, signaling he was ready to fork over the record-setting price of 102,000 kronor per kilo.

Dalshage told the TT news agency that the batch of roughly one-kilogramme lobsters will in turn be auctioned off for charity in Lund on Friday night.

And despite paying an already record price for the year’s first lobsters, Dalshage said he was prepared to bid even more.

“We could have gone quite a bit higher. But there was an upper threshold there,” he told TT.

When asked whether the price he paid was really an appropriate per kilo price for lobster, Dalshage justified the princely sum by responding “first is always first”.

“Then there is also a bit of prestige among us here in Gothenburg harbour. At the moment, I think it’s a reasonable price, but give it a few months and I might say something else,” he said.

While much of the excitement from Tuesday’s lobster auction stemmed from the record-setting price, the event will also result in a police report for illegal fishing, as one of the roughly 70 crustaceans auctioned off was below the minimum size.

After the first lobster was auctioned off, prices dropped dramatically to around 300 to 500 kronor per kilo.

Sweden’s lobster fishing seasons runs through the end of April