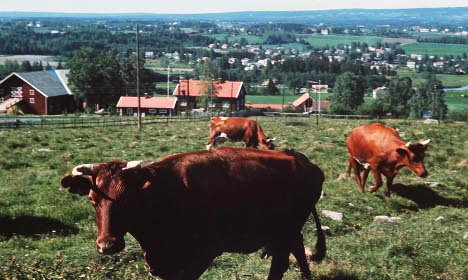 Agricultural subsides made up 60 percent of Norwegian farmers’ income from 2009 to 2011.

The Organisation for Economic Cooperation and Development said Norway needs to do more to cut production support and increase access to markets, newspaper Nationen reports.

Government subsidies for farmers in OECD countries have fallen by half over 40 years, reaching the lowest levels since the mid-1980s, according to the report.

But the fall reflected a rise of food prices rather than changes in subsidy policies, the report said.

The rise of food prices had propped up revenues for the sector, according to an annual report on agricultural policies by the 34-nation OECD.

This is equivalent to 19 percent of farm gross receipts in the 34-member OECD countries, a slight drop from 20 percent in 2010.

"This is the lowest level observed since OECD began measuring support in the mid-1980s, when the producer support estimate as percentage of gross farm receipts was almost twice as high (37 percent)," said the OECD.

However, the decline was "driven by developments on international markets, rather than by explicit policy changes."

Global food prices hit a peak in February 2011, according to the Food and Agriculture Organisation's index of prices.

Meanwhile the differences in support levels vary substantially throughout the group, with those in Australia, New Zealand and Chile reaching just 1 to 4 percent.

In Switzerland, Japan and Korea, just over half of gross farm receipts were made up by agricultural support.