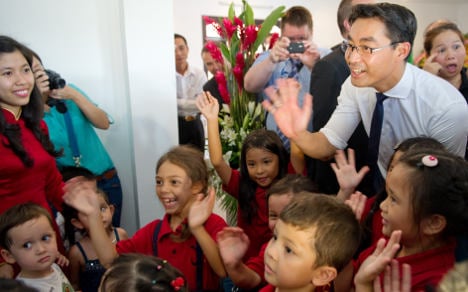 Rösler, now also Germany’s economy minister and leader of the pro-business Free Democratic Party (FDP), travelled to the country of his birth this week on an official visit.

During the visit, meant to promote Germany’s business interests, he learnt of the plight of the orphanage that nuns found him lying outside as a baby 39 years ago.

Rösler learnt of its situation at an embassy reception, where a Catholic priest told him that the Vietnamese government is planning to confiscate the property and take over the building, the Bild newspaper reported on Thursday. The land is state-owned, and its contract with the orphanage is about to expire.

The minister then promised to find out if he could do anything to stop it, sources close to him said, though he did not take up the matter with Vietnamese authorities. FDP MP Jürgen Koppelin is reportedly working on the issue, and will try to exert influence through the Foreign Ministry and parliamentary working groups.

“We must prevent this confiscation,” he told the paper. “After this successful journey, saving the orphanage has become a matter close to his heart.”

He added the house was a symbol of the 1,000 Vietnamese orphans brought to Germany by Lower Saxony state premier Ernst Albrecht over 35 years ago. “One of these was Philipp Rösler,” Koppelin said.

German business and industry interests were reportedly satisfied with the official side of Rösler’s trip, Der Spiegel reported. “Rösler insisted on certain issues that are important to us, and the Vietnamese agreed to pursue them,” said the country’s Chambers of Commerce and Industry (DIHK) President Hans Heinrich Driftmann.