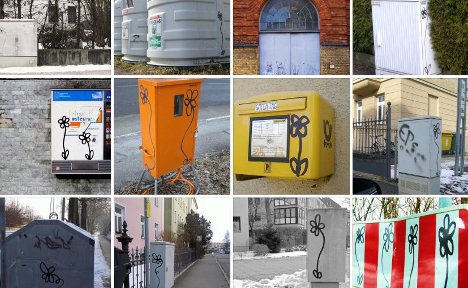 Augsburg court hit the 25-year-old identified as Bernhard T. with a steep fine and probation for 470 counts of graffiti vandalism, causing damages estimated at €70,000.

The “flowers of Augsburg” Augsburgblumen became a cult symbol of the city; with their own Facebook page and appeared on a range of products including badges and fridge magnets.

The city government even toyed with the idea of using the design as a marketing symbol, but then back-pedalled and denounced the flowers, vowing to sue for damages, said the Augsburg Allgemeine newspaper.

Bernhard T. said he had meant them as a ‘nice gesture.’

“I wanted to make the world a little more beautiful,” he told the paper.

The prosecutor had called for him to be jailed two years in jail, as he had a prior conviction.

But Judge Michael Nißl was lenient on him, because his confession saved investigators an expensive and lengthy investigation, the Augsburg Allgemeine said.

He also showed remorse. “I know that I really made a mess. I’m sorry,” he said.

Nißl fined him €12,000 and gave him a ten-month suspended sentence.

But even he couldn’t resist being somewhat creative himself, telling the defendant, “If you commit another crime, your future will be neither rosy nor flowery.”