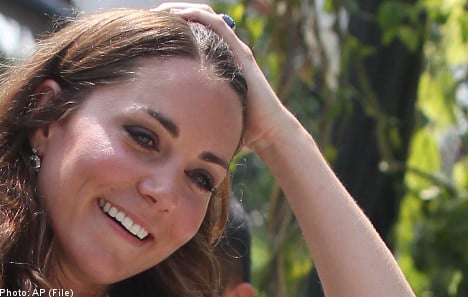 The spread includes 11 controversial paparazzi pictures taken during the couple’s vacation in southern France several weeks ago, five of which show the princess topless.

One grainy shot taken from the front shows her removing her turquoise-coloured bikini bottoms.

The magazine was the fourth publication to print the pictures which have outraged the British royal family.

They were first published by French magazine Closer last week, then in Ireland’s Daily Star and Italy’s Chi magazine. They have already been widely circulated on the Internet.

“This is nothing unusual, these are quite nice pictures if you compare with other celebrity pictures that we publish all the time,” Se och Hör chief editor Carina Löfkvist told AFP.

She had no figures for the number of copies Se och Hör sold on Wednesday, but said the publication had not made headlines in Sweden.

“It’s been a bit of a topic of conversation … but it’s nothing special,” she said.

Se och Hör belongs to the Denmark-based Aller Media company that owns the Danish celebrity magazine Se og Hør, which announced earlier Wednesday that it plans to publish a 16-page spread with the pictures on Thursday.

Löfkvist said her magazine bought the pictures last Friday “from photographers and photo agencies, the way we always do” and “before everything erupted.”

The decision to publish the photos has incensed the royal family, whose lawyers have obtained a civil injunction and sought criminal charges in Paris.

French authorities on Tuesday banned Closer magazine from any further distribution of the pictures and began a criminal probe into how they were obtained.