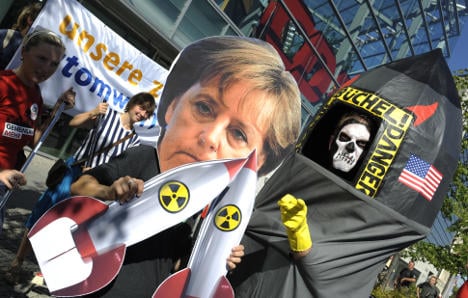 Although Foreign Minister Guido Westerwelle had put the removal of the 20 or so US nuclear warheads from Germany at the heart of his foreign policy aims, signs emerged two years ago that this might not be feasible.

Now, the Frankfurter Rundschau newspaper reported on Wednesday, the government has bowed to NATO plans to not only keep the bombs in Germany, but to modernise them.

Billions will be spent on modernising the bombs themselves, while the Bundeswehr is expected to spend around €250 million to keep its Tornado fighter jets – which would be used to drop the US nuclear bombs – serviceable until 2024.

In what it called an about-turn in German defence policy, the newspaper said the move was particularly painful for Westerwelle, who it noted had anchored the withdrawal of the US nukes from Germany in the 2009 coalition agreement.

Officially there are between 10 and 20 nuclear bombs at the Büchel Air Base in Rhineland Palatinate – relics of the Cold War stock of about 200 which were kept there until the 1990s.

Although many do not see the point of keeping the weapons in Germany, the paper said France, Turkey and eastern European states are keen to see them stay, while other countries want to see Russia reduce its tactical nuclear weapons arsenal first.

The Berliner Zeitung newspaper heard from military experts that the government had given up its position at the NATO summit in Chicago at the end of May, when Chancellor Angela Merkel and Westerwelle both assented to a joint declaration.

That declaration included a statement saying that nuclear weapons were a central component of the total NATO capacity, and that the current deployment was sufficient to provide an effective defence.

But although the foreign ministry still stresses that NATO is, in principle, working towards disarmament and control, Karl-Heinz Kamp, research director of the NATO Defence College in Rome, said there were several reasons why the Germans had to back down.

“Generally the euphoria about nuclear disarmament has dissipated,” he told the Frankfurter Rundschau. “And the relationship between Russia and the USA has cooled again. And with his public foray, Westerwelle did not make negotiations in NATO easier.”

He said the US was planning to spend around $4 billion to modernise the bombs and make them steerable rather than just drop bombs as they are now, yet this has also brought criticism.

“The modernisation of these weapons by the USA threatens to remove the strict distinction between tactical and strategic weapons,” said Gernot Erler, foreign affairs spokesman for the opposition Social Democratic Party (SPD).

He said the SPD would call on the government to explain what steps it now planned in working towards the aim of removing US nuclear weapons from Germany and Europe.