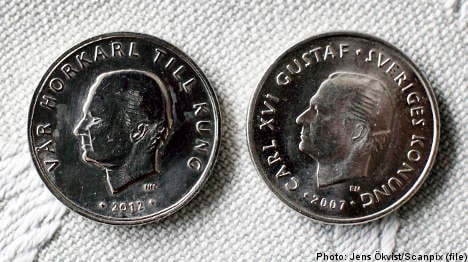 “Yes, it is me behind the coins. I have done it myself and have sought expert help when I have needed it,” the artist told the Svenska Dagbladet (SvD) daily.

The mystery of the unorthodox coins began to gather pace after they began to surface in the money system during the summer.

Instead of the usual “Carl XVI Gustaf Sveriges Konung” (‘Carl XVI Gustaf Sweden’s King’), the text written around the image of the King’s head on each coin read “Vår horkarl till Kung”, which translates roughly into English as “Our whorer of a King”.

The artist told the newspaper that it had always been the intention to come forward but was awaiting the correct preparation.

The reactions to the coins were the crucial part of the art work, the artist explained. Interest and debate has been substantial, both in Sweden and abroad.

The flip side of the coins is indistinguishable from the real coins and experts recently concluded that the forgery seemed professionally done.

Specialist equipment has been used to hollow out one whole side of the coin all the way out to the edges, removing the image of the king’s face, SvD reported.

In the hollowed out space remaining, the forgers have inserted their own pre-cut image of the king together with the new defamatory text, soldered into place, and sharpened the grooves.

The coin,s royal insult is an apparent reference to the King’s rumoured infidelities detailed in a tell-all biography of the king published in late 2010.

A couple of samples of the coins are currently on display at the National Museum of Economy in Stockholm.