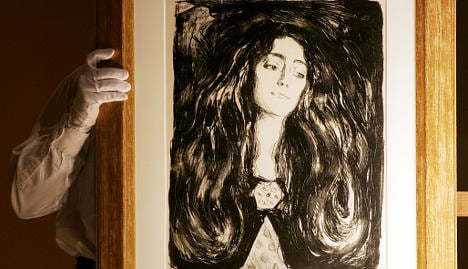 Although the artist behind The Scream was long thought to have died childless, US-based nun Janet Weber has for the first time come forward with her claim that Munch may in fact have had twins with her grandmother, the violinist and model Eva Mudocci.

“It’s fun for us if it’s true,” Elisabeth Munch-Ellingsen, one of the artist’s Norwegian heirs, told broadcaster NRK.

Munch-Ellingsen said she would have “no problem” getting a DNA test to prove whether or not she was related to Janet Weber.

“But it’s a bit sad if he was the father of two children who were 34 years old when he died. If this is true, then he never got to meet his children. That’s a shame," said Munch-Ellingsen.

The model for one of his best-known paintings, The Brooch, Mudocci became romantically involved with Munch after they met in Paris in 1903.

The London-born musician, originally know as Evangeline Hope Muddock, gave birth to twins, Isobel and Kai, at a hospital in Copenhagen in December 1908.

According to Janet Weber, Edvard Munch was likely never informed he had children.

Together with Washington-based Munch expert Sally Epstein, Weber has recently been trying to piece together the puzzle of her origins.

“We know that Munch and Eva Mudocci had a relationship, and that she was his lover,” Epstein told NRK.

“We know they were together the year before she gave birth. We know they continued to send each other letters throughout the years and met several times later.”

Janet Weber said she had no interest in seeking an inheritance, and was driven instead by a desire to learn more about her heritage.

“For me to know that Edvard Munch might be my grandfather is almost incomprehensible,” she said.

Munch's most famous painting, The Scream, was sold at auction in New York in May for a world record $119.9.