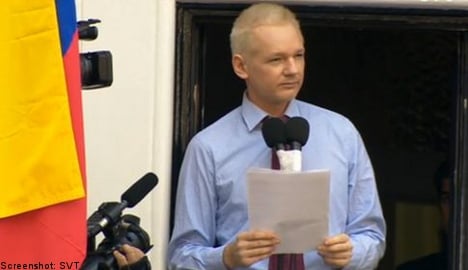 Assange emerged dressed in a blue shirt and tie onto the balcony at the embassy on Sunday afternoon and was met by a round of cheers and applause from some sections of the gathered crowd.

“The world were watching because you were watching,” the WikiLeaks founder said in thanks to his supporters who had gathered outside the embassy in response to an increase in the police presence.

Reading from a prepared statement, the Australian began by thanking Ecuador and its president Rafael Correa, and a slew of Latin American countries for standing up for the political asylum process.

“A courageous Latin American country has taken a stand for justice,” he said.

He also expressed thanks to “the people” of Sweden, the UK, the US and Australia who had offered him their support. And there was also a mention for his children and family.

“Forgive me, we will be reunited soon,” he said to cheers from the crowd gathered in the light rain in the plush London neighbourhood of Knightsbridge.

Assange then directed his ire towards the United States government and called on the Obama administration to leave WikiLeaks alone and end its FBI investigation.

“The US administration’s war on whistleblowers must end,” Assange said. “As WikiLeaks stands under threat, so does the freedom of expression.”

He continued to call for the release of Private Bradley Manning, the alleged source of much of the classified material published by WikiLeaks.

“He is a hero and an example to all of us and one of the world’s foremost political prisoners,” Assange said.

He furthermore challenged the US to not “pursue journalists for shining a light on the secret crimes of the powerful”.

Assange concluded by expressing support to the jailed Russian punk band Pussy Riot and then made a thumbs up sign and departed back inside the embassy.

The 41-year-old Australian however made no mention of the extradition process of which he is the subject nor the sex offence allegations against him in Sweden.

Despite Ecuador providing a haven for Assange, British Foreign Secretary William Hague has said Britain had no choice but to seek his extradition.

Britain has angered Ecuador by suggesting it could invoke the Diplomatic and Consular Premises Act of 1987, which it says allows it to revoke the diplomatic immunity of an embassy on British soil and go in to arrest Assange.

Assange, 41, took refuge in the embassy on June 19th to evade extradition to Sweden. Supporters of the former hacker believe that once in Sweden he could be extradited to the United States.

The South American country has meanwhile received powerful backing from regional allies as they warned Britain of “grave consequences” if it breaches diplomatic security at the London embassy.

Foreign ministers from the Venezuela-led so-called Bolivarian Alliance for the People of Our America (ALBA) flew to Ecuador on Saturday to demonstrate full diplomatic support.

“We warn the government of the United Kingdom that it will face grave consequences around the world if it directly breaches the territorial integrity of the Embassy of the Republic of Ecuador in London,” said a statement issued at the end of the ALBA meeting.

WikiLeaks’ publication of a vast cache of confidential government files has enraged the US government, while his backers fear he could be tried on espionage charges there and face the death penalty.

In 2010, WikiLeaks published hundreds of thousands of US military documents on the war in Iraq and Afghanistan, as well as diplomatic cables that deeply embarrassed Washington.