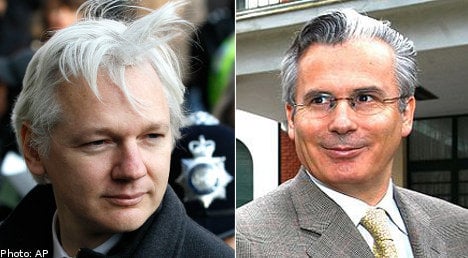 “I have spoken to Julian Assange and I can tell you that he is in fighting spirit. He is thankful to the people of Ecuador and especially to the President (Rafael) Correa for granting him asylum,” lawyer Baltasar Garzon said outside the embassy ahead of an expected address by Assange after 2pm London time on Sunday.

“Julian Assange has always fought for the truth and justice and has defended the human right and continues to do so. He demands that WikiLeaks and his own right also be respected,” said Garzon as he read from a statement.

“Julian Assange has instructed his lawyers to carry out a legal action in order to protect the right of WikiLeaks, Julian himself and all those currently being investigated,” added the lawyer.

The Spanish lawyer who is renowned for pursuing Chile’s former dictator Augusto Pinochet did not elaborate on the new legal move requested by Assange.

The former hacker was later Sunday to face the world’s media from Ecuador’s embassy in London where he has been holed up for two months, but the 41-year-old risks arrest if he steps outside.

As Assange prepared to make his statement — possibly from a low balcony — WikiLeaks urged Sweden, which wants to question its website’s founder over alleged sexual misconduct, to guarantee it would not extradite him to the United States.

As rain fell around the embassy, around 50 police officers, roughly the same amount of Assange supporters and many members of the world’s media gathered outside the building awaiting his first public statement since March.

Assange is said to be living in a small room within the building, which is located in London’s plush Knightsbridge district and round the corner from the luxury Harrods department store.

Amid a widening diplomatic row over the affair, Ecuador on Thursday granted asylum to Assange, whose website enraged the United States by publishing a

With police primed to detain him Sunday, Assange must find a way of speaking publicly without setting foot outside, raising the possibility of him being forced to speak from a balcony or lean out of a window.

WikiLeaks was tight-lipped about the logistics of Assange’s planned appearance, with Hrafnsson saying what little he knew could not be discussed for security reasons.

But Britain’s Foreign Office has warned that the steps to the embassy were considered British territory, while police said officers would take “appropriate” action” if he strayed from the building.

Despite Ecuador providing a haven for Assange, British Foreign Secretary William Hague has said Britain had no choice but to seek his extradition.

Britain has angered Ecuador by suggesting it could invoke the Diplomatic and Consular Premises Act of 1987, which it says allows it to revoke the diplomatic immunity of an embassy on British soil and go in to arrest Assange.

Assange, 41, took refuge in the embassy on June 19th to evade extradition to Sweden. Supporters of the former hacker believe that once in Sweden he could

be extradited to the United States.

The South American country has meanwhile received powerful backing from regional allies as they warned Britain of “grave consequences” if it breaches diplomatic security at the London embassy.

Foreign ministers from the Venezuela-led so-called Bolivarian Alliance for the People of Our America (ALBA) flew to Ecuador on Saturday to demonstrate full diplomatic support.

“We warn the government of the United Kingdom that it will face grave consequences around the world if it directly breaches the territorial integrity of the Embassy of the Republic of Ecuador in London,” said a statement issued at the end of the ALBA meeting.

WikiLeaks’ publication of a vast cache of confidential government files has enraged the US government, while his backers fear he could be tried on espionage charges there and face the death penalty.

In 2010, WikiLeaks published hundreds of thousands of US military documents on the war in Iraq and Afghanistan, as well as diplomatic cables that deeply embarrassed Washington.