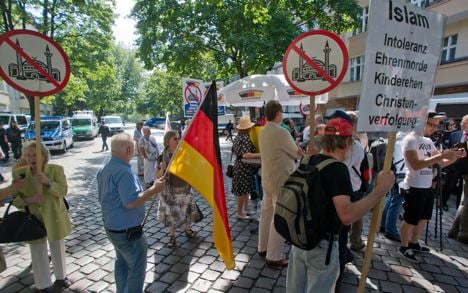 Hundreds of police were braced for clashes on Saturday when around 50 members of the Pro Deutschland group displayed the provocative cartoon alongside banners reading “Stop Islamisation.”

A police spokesman said around 100 far-left and anti-Nazi activists staged a counter-protest nearby, with fears the two sides could descend into violence.

Several years ago, an infamous Danish cartoon of the Prophet Mohammed prompted a violent reaction around the world. The depiction of the prophet is prohibited under Islamic law.

The court said the cartoons were protected as “artistic freedom” and could not legally be considered as abuse of a religious group.

“Simply showing the Mohammed cartoons does not qualify as a call to hatred or violence against a specific segment of the population,” it ruled.

Pro Deutschland have registered a total of nine demonstrations for Saturday and Sunday, including a mosque reputed to be a hotbed of the more radical Islamic Salafist community. The Islamic Council has responded by calling on Muslims to ignore the protests.

In May this year, violence broke out during a similar rally by the extreme right against Salafist Muslims in the western state of North Rhine-Westphalia.

Salafists practice an austere form of Sunni Islam. German officials have accused them of also condoning violence against state institutions.

In June Germany banned a Salafist group and hundreds of police officers raided more than 70 homes, schools and mosques across the country in a clamp-down on “dangerous extremists.”

Authorities estimate there are about 2,500 Salafists in Germany.