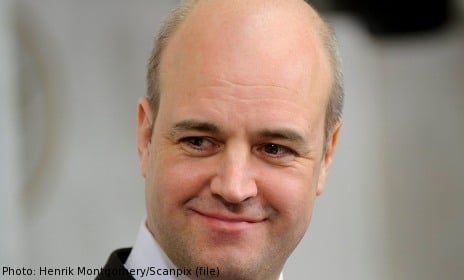 “I welcome her initiative and invitation,” Reinfeldt wrote in a debate article in the Dagens Nyheter daily on Saturday.

Reinfeldt underlined the importance of the Alliance coalition sticking together and proposed a cross-party committee to develop a joint manifesto for the 2014 election.

The Alliance was formed following a meeting at Lööf’s Centre Party predecessor Maud Olofsson’s home in Högfors in August 2004 and the joint platform led to success at the 2006 and the 2010 elections.

Reinfeldt devoted much of his debate article to defending the Alliance government’s record, focusing on key income tax cuts and stable state finances.

“Our reforms have fundamentally changed Sweden for the better,” he wrote.

“The work ethic has been restored. Employment has increased, social exclusion decreased, far fewer are currently on sick leave, and in contrast to previous crises people have stayed in work.”

Reinfeldt however recognised that the government needs to show “humility” in front of the challenges that remain and pointed out that there is much left for the Alliance government to do.

Among other things the Moderate Party leader observed that unemployment remained unacceptably high, pointing out that the young and foreign-born are faced with particular challenges.

Reinfelt laid out his suggestions to his government colleagues – Jan Björklund, Annie Lööf and Göran Hägglund – in preparation for the 2014-2018 parliamentary term.

He proposed working groups to develop Alliance policy, a joint manifesto, an ideological platform to develop a framework of shared values and an election committee responsible for managing the campaign.