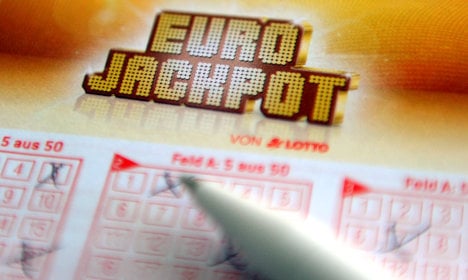 The lucky winner, whose identity is still unknown, bought a ticket in North Rhine-Westphalia for Friday’s draw using randomly generated numbers – six of which appeared in the seven number draw, said the Westlotto company.

Since nobody had won the jackpot – which requires getting all 7 numbers correct – for the previous 13 weeks, the Euro Jackpot rules stated that the money would be handed out to the next lowest winning category.

The winner still hadn’t claimed their money by Sunday. “In our experience, with such a large win, people have to draw breath first,” a Westlotto spokesman told the Bild tabloid on Saturday.

Meanwhile, 62 percent of Germans do not believe money can bring happiness, according to a recent study by Emnid, wrote the online version of Stern magazine on Saturday.

The mystery German’s win of exactly €27,545,857.50 amounts to the largest in the recently-launched Euro Jackpot lottery, and the third largest win ever in Germany. The biggest was won in October 2006, when a player took home €37.7 million.

The Euro Jackpot is open to players from Germany, Spain, Denmark, Estonia, the Netherlands, Italy, Slovenia and Finland.