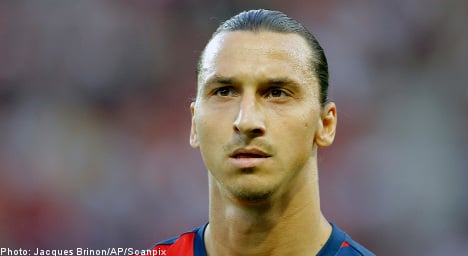 Paris Saint Germain thanked a double from their new record signing – including a last-gasp penalty – as they could only draw 2-2 at the Parc des Princes against lowly Lorient.

Much is expected from PSG after they invested more than €100 million – including 20 million in former AC Milan favourite Ibrahimovic – in a bid to use a seemingly bottomless pit of cash provided by their Qatari investors to propel themselves to a first league title in 19 years.

But it was fortunate the Swedish striker came up trumps in the second half after an early Maxwell own goal and a Jeremy Aladiere effort on the stroke of half-time had put Lorient, who only just avoided the drop last term, into a 2-0 lead at the break.

Thereafter, Carlo Ancelotti’s hosts rallied and Ibrahimovic quickly found his shooting boots – his first effort involved an exquisite chest trap to reduce the arrears – to save a point.

PSG thus followed the nervy example of reigning champions Montpellier, who fluffed their own opening day lines as they were only able to manage a 1-1 draw at home to nine-man Toulouse.

Rene Girard’s hosts lifted their first ever league title in May but then lost their league top scorer Olivier Giroud to Arsenal pre-season and the result was a relative lack of sharpness which saw them pay the price of two dropped points.

Nigerian striker John Utaka sent Souleymane Camara clear for the hosts in the 34th minute and he clipped home – but instead of capitalising Montpellier found themselves pegged back 18 minutes from time when Wissam Ben Yedder headed home from a cross by Serge Aurier.

Toulouse were left hanging on grimly after they had Adrien Regattin and Serge Aurier sent off late on.

Montpellier had themselves played for almost an hour a man short after Tunisian star Jamel Saihi was red-carded for a foul on Francois Sirieix six minutes before the break.

“It’s a point – a bit of a shame to finish with ten men,” said a pensive Girard.

“It’s a rather timid return (to league action).”

Elsewhere, Yoann Gourcuff was on target as Lyon won 1-0 at Rennes while Bordeaux also won on their travels – 3-2 at modest Evian.

On Sunday, 1950s giants Reims, back in the top flight after 33 years, host Marseille.