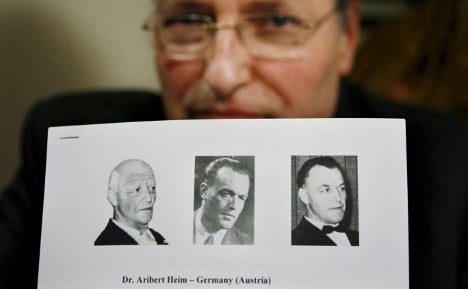 A regional court in the city of Baden-Baden said documents from Egypt, where Heim was reported to have died in 1992, had been analysed, and that it expected to release its findings as early as the end of September.

Austrian-born Heim was also known as the “Butcher of Mauthausen” for performing medical experiments on Nazi concentration camp prisoners.

In 1945 he was arrested by the US military, but they let him go after two and a half years, and he went on to work as a gynecologist in Baden-Baden.

He worked in the picturesque spa town for around 15 years but fled in 1962 as West German authorities were about to arrest him.

In February 1992, German public television channel ZDF and The New York Times reported that Heim had died of bowel cancer in Egypt that year, citing his son and acquaintances in Cairo.

But a report by Der Spiegel news weekly several months later said investigators believed the reports did not provide “any proof of his death” and were continuing to examine “every lead.”

The Simon Wiesenthal Centre in Jerusalem also said it did not believe the story.

The court in the southwestern city of Baden-Baden said it had received on Thursday initial results from the analysis of documents from Egypt, which it had obtained in the spring.

Further tests, including chemical and biological ones, were still pending, the court said in a written statement.

But it said it would decide “whether, on the basis of the results of the evaluation until now, the passing of the wanted person can be definitely established and the process stopped.”

No date for a decision could be given yet, it stressed, adding it would not however be before the end of September or early October.